Gary Robert Fiscus lost his valiant, four year battle with myelodysplastic syndrome and leukemia on Tuesday, Nov. 21, 2017. He was born Jan. 2, 1943 in St. Marys, PA to the late Robert I. Fiscus and Florence M. Ostrom Fiscus. He was also preceded in death by his grandparents, Fred and Mildred Marsh Ostrom. Gary attended schools in Jamestown, NY, graduating from Jamestown High School in 1961 where he was a member of Chi Sigma Chi fraternity. Shortly after graduation, he began his life long career in finance at the Bank of Jamestown. 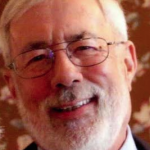 On August 24, 1963 he married the love of his live, Eileen K. Fletcher at the First United Methodist Church in Jamestown, NY. They remained happily married until his death, enjoying 54 years together.

Gary joined the U.S. Army in Nov. 1966 and he proudly served his country for three years, including one tour in Vietnam. Upon being honorably discharged from the Army at the rank of E6, he continued his banking career at the Bank of Jamestown. Gary later worked for Empire of America taking him from Jamestown, NY to Buffalo, NY and ultimately to Tampa, FL where he served as Divisional President. He continued his career in finance in Richmond, VA retiring from Merrill Lynch.

Over many years, Gary dedicated countless hours to the Boy Scouts of America where he personally impacted the lives of dozens of boys guiding them to become responsible young men.

Gary was a lifelong outdoorsman, enjoying deer and turkey hunting, as well as fly fishing for trout; especially with his “old” cronies from NY State and later with his three sons and his grandchildren. He also enjoyed working in his gardens and tending to his chickens at “the Cabin”, his dream home in Prospect, VA.

Gary lived for and loved his family and the Lord. An active member of Prospect United Methodist Church, he is survived by his wife of 54 years, Eileen of Prospect; his daughter Emily Maze (Daniel) of Midlothian, VA; his sons, Kevin (Kayla) of Greensboro, NC, David (Wendy) of Midlothian, VA, and Mark (Caley) of Prospect, VA as well as Christine Fabian Fiscus of High Point, NC. He loved and was perhaps most proud of his nine grandchildren; Megan, Logan, Katie, Erik, Robert, Andrew, Elizabeth, Kaitlyn and Kyle. Also survived by his half-sister Suzy Fiscus Armstrong, his half-brother James Fiscus, both of Taft, CA, his half-brother Michael Fiscus of Emporium, PA and numerous cousins, nieces and nephews.

The family wishes to thank Dr. Gisa-Beate Schunn, her staff at Virginia Cancer Institute, and the amazing nurses on 2 North at Johnston-Willis Hospital. Their care and compassion made a difficult time far more bearable and gave us four years with Gary that we might not otherwise have had. We cannot thank you enough.

A funeral service was conducted at 2 p.m. on Sunday, Nov. 26, 2017 at Prospect United Methodist Church in Prospect, VA, with visitation from 12:30 p.m. until the time of service. In lieu of flowers, please consider a donation to Prospect United Methodist Church, P.O. Box 216, Prospect, VA 23960, the MDS Foundation (mds-foundation.org/donate/), or the Leukemia & Lymphoma Society (www.donate.lls. org).