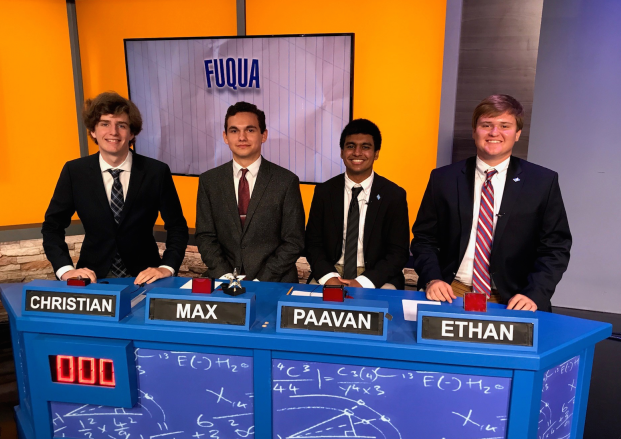 Fuqua competes in Battle of the Brains

Every fall, public and independent schools from across central Virginia gather at the CBS television studios in Richmond to test their knowledge, their competitiveness and their buzzer speed in the Battle of the Brains. This fall, Fuqua sent a team of four young men — Paavan Bonagiri, Max Gebauer, Christian Huggard and Ethan Watson — to represent the school in this academic competition. As the day drew near, the team, captained by Max Gebauer, felt confident and loose. They prepared by watching old episodes of Battle of the Brains on YouTube and gathering new trivia information on www.sporcle.com. According to a press release, the first-round match pitted the team against Fork Union Military Academy (FUMA), and the guys were amped up to test their mettle.

The competition was divided into four rounds: three toss-up rounds and one category round. As each round drew on, the Fuqua team slowly began to separate themselves from the competition. Each member of the team performed admirably and complemented each other.

“Max brought a wealth of general knowledge, Paavan crushed the math questions, Ethan supplied the geographical wisdom, and Christian gave a history lesson to FUMA,” officials said in the release. “By the end of the match, the guys had scored more points than any previous Fuqua team ever, 370, and they refused to let FUMA into the game — winning the first match going away.”

The Battle of the Brains competition will continue when Fuqua School takes on The Commonwealth Governor’s School at Riverbend High School in Fredericksburg for the second round. The episode will be broadcast on WTVR-CBS Saturday morning, Jan. 27, 2018 at 10 a.m. You can catch all of the previous matches, including years prior by visiting the Battle of the Brains page on YouTube.

Heresy in the garden

Full disclosure upfront: this column is about disagreeing with conventional wisdom and the politically correct. It’s full on heresy. Not... read more