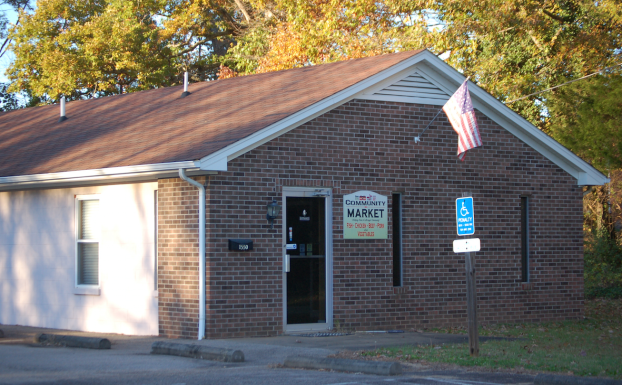 The property on 1550 Anderson Highway, the site of a food pantry where those with food insecurity can receive assistance, was leased to Cumberland Community Cares (CCC), which operates the pantry. (Photo by Emily Hollingsworth.)

A public hearing held during the meeting addressed a request for the county property at 1550 Anderson Highway to be leased to Cumberland Community Cares (CCC).

Doris Seal, a member of the CCC board, was the only speaker during the public hearing. Seal and Linda Eanes with the Cumberland Cooperative Extension presented on the CCC during October’s meeting.

Other board members for Cumberland Community Cares (CCC) attended the Board of Supervisors meeting last Tuesday.

She noted that the CCC has received donations of three freezers and a refrigerator and potential shelving equipment.

“We’re having a great deal of support for the pantry,” Seal said. “We really appreciate all of your consideration, and we hope that we’ll get the approval.” She noted the pantry would also need to meet regulations for Richmond based nonprofit FeedMore.

Seal noted that the CCC has connected with FACES, based in Farmville, which is distributing packages of protein bars and drinks that the CCC will receive to store at the pantry.

“There’s a lot of opportunities for food right now as far as group meetings and group activities,” Seal said.

District Third Supervisor and Chairman Kevin Ingle asked whether the organization would continue to use the cafeteria at the former Cumberland County Elementary School building.

Seal said they would for the mobile pantry.

Ingle asked if the organization would need to use both facilities. Seal responded the cafeteria facility would be needed as there would be too much traffic if the mobile pantry was located at the proposed pantry location.

Following the public hearing, members of the board voted to approve the leased property to the CCC.

Seal said during an October board meeting that when Central Virginia nonprofit FeedMore provided the CCC with a mobile food pantry and the CCC began providing food to residents in the county in May 2014, it had provided goods for 79 people. During September of this year, Seal said, she estimates that the CCC gave food to 194 people. She said she expects the number to rise closer to 200 by the end of the year or early 2018.