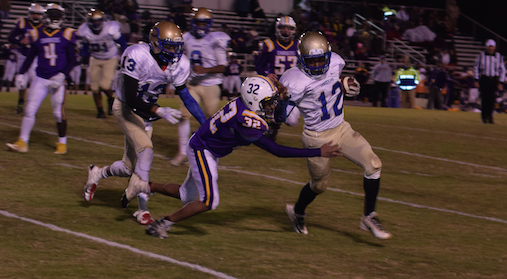 Cumberland County High School’s varsity football team showed improvement Friday night in its second game this year against host Central Lunenburg High School, but the Dukes were still not able to contain the Chargers’ offense and ultimately fell 56-20 in the first round of the Class 1 Region B playoffs.

With the defeat, Cumberland finished a difficult 2017 season with an 0-11 record, having qualified for the playoffs due to a lack of teams in Region 1B that had played a playoff-eligible regular season schedule.

On Sept. 22 during the regular season, the Dukes took on the Chargers and fell 47-0.

Cumberland Athletic Director Alfonso Bell, who handled head coaching duties for the Dukes last week, said after Friday’s game that “I think we played much better than we did the first time against them, offensively. Defensively, we didn’t make them punt, and if you don’t make anyone punt, that’s not good for the defense.”

The No. 3-seeded Chargers built a 14-0 lead after the first quarter and continued to add points in the second quarter, but it was also during the second quarter that the No. 6 Dukes began to respond. Senior running back Darron Ridley scored on a four-yard touchdown run.

Central held a 28-7 lead when Cumberland cut it to 28-14 following a 16-yard scoring run by junior quarterback Ziahir Berry.

“Our offensive line played much better,” Bell said. “They stayed on their blocks, and that was our goal for the week, to actually move the ball and try to control the clock. We knew we were going to have some issues on the defensive side of the ball, containing their offense.”

The Chargers held a 35-14 lead at halftime and pushed it to 56-14 after three quarters.

“We had spurts on the defensive side,” Bell said. “But that little counter trey offense that they run kind of hurt us on the edges. We’re kind of small on the edge, and we had young guys playing out there, and they didn’t understand how to take on that offense.”

Ridley scored the final points of the game early in the fourth quarter when he reached the end zone on a 21-yard run.

For the game, Ridley gained 58 yards and two touchdowns on eight carries. Junior running back Kajuan Copeland had seven carries for 48 yards, and Berry registered six carries for 31 yards and a score.

Berry filled in as the starter behind center in place of senior quarterback Darius Kyle, who did not play Friday.

On defense, the Dukes were led by Ridley, who recorded 10 total tackles, including seven solo tackles, and a fumble recovery.