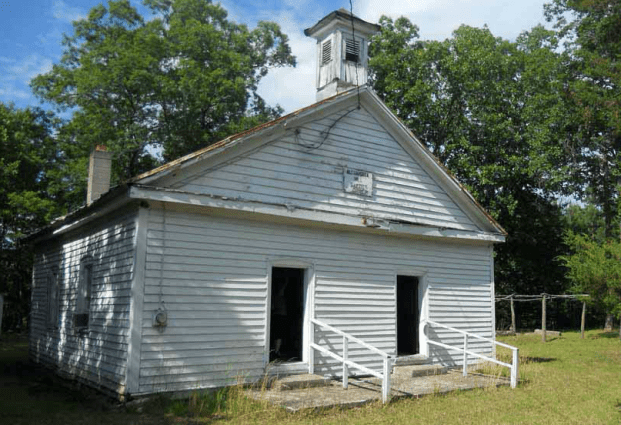 Alexander Hill Baptist Church in Buckingham County, pictured here, was added to the National Register of Historic Places on Nov. 7.

Alexander Hill Baptist Church in Buckingham County, one of the oldest African-American churches in the county, has been added to the National Register of Historic Places.

The church was also added to the Virginia Landmarks Register (VLR) by the Virginia Department of Historic Resources in July.

Louis said though difficult to determine the exact time the church was established, she estimates it had developed in the mid to late 1800s, following the end of the Civil War.

Before the building was constructed, the original site of the church was a shelter made with logs, branches, leaves and pine needles called a bush arbor, according to earlier reports from The Herald, as African-American citizens at the time were not allowed to worship with white churchgoers. The arbor remains at the church site today.

Services were held in the shelter and the pastor stood on a mound of dirt to deliver sermons.

Louis described Alexander Hill as a sort of grandfather church from which several congregations stemmed.

“The goal is to preserve it,” Louis said about the Alexander Hill site.

She said she hopes the church’s position on the national register may make the church more eligible for grants.

“We’ll try to restore it to more or less its original state,” Louis said. “This designation on this historic registry, we’ll be more able to get grants with which to work (toward) preserving it.”

A judge in Buckingham County appointed Mary E. Brown Shelton, Joseph Scruggs and Pennington as trustees to work to restore the church in 2016.

Louis said she and other trustees of the church aim to build a pavilion by the church where special events can be held. Louis also aims for the church to act as a museum allowing participants to tour through it.