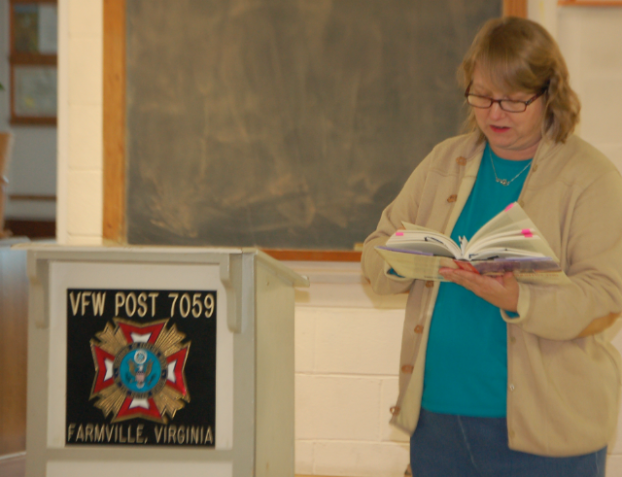 Author Jerri Bell reads an excerpt from an anthology she co-wrote, which focuses on the impact of women in the armed services from the American Revolution era to the present day.

Members of the community gathered at the Veterans of Foreign Wars (VFW) Post 7059 on Graham Road to hear little-known stories of American soldiers in conflict from the Civil War to the present day, that is, the stories of women who served the U.S. both on and off the front lines.

Maryland author Jerri Bell, co-editor of the anthology, “It’s My Country too: Womens Military Stories from the American Revolution to Afghanistan,” read selections from the anthology Thursday and addressed myths of women who served in the armed forces.

Bell said she and co-editor Tracy Crow have spent 30 years in the armed services between the two of them and said they became increasingly alarmed, when compiling the stories, of how many female veterans they had never heard of before.

“When we started researching that historical context, we suddenly got really angry,” Bell said during the event. “Because we realized that I’ve been in (the Navy) for 20 years, Tracy has been in the Marine Corps for 30 years, and between the two of us, we have heard none of the stories that are in this book.”

The anthology, published in July, contains dozens of accounts of women who have fought on the front lines of conflicts, overcoming barriers relating to gender and race. During the event, Bell read the story of Cathy Williams, the first female African-American soldier in the Civil War era, who dressed as a man and served with the Buffalo Soldiers, an all African-American regiment. She also read the account of Brooke King, a veteran who worked as a recovery specialist in Iraq. She often had to recover parts from weaponry and vehicles damaged in conflict, Bell said. It also required recovering those who had died.

Dr. Michael Lund, emeritus English professor at Longwood University, began having students of a writing class he taught read selections from the anthology as a class assignment. He contacted Bell about having her come to speak at the VFW.

Lund, who began a writing program for area veterans, said he and other participants during Thursday’s presentation were struck and moved by the accounts of the service members, many who were women and also served in the armed forces. Participants said, according to Lund, they understood the social and gender dynamics that could have prevented these stories from being told.

“None of us had heard these individual stories,” Lund said. “What (the anthology) is bringing to the American public is an interesting part of our history … women in the military or really in combat situations since the Civil War until the present day. It’s just a part of history we don’t know about.”

The Farmville Downtown Partnership is teaming up with the Farmville Area Chamber of Commerce and will be giving away $5... read more