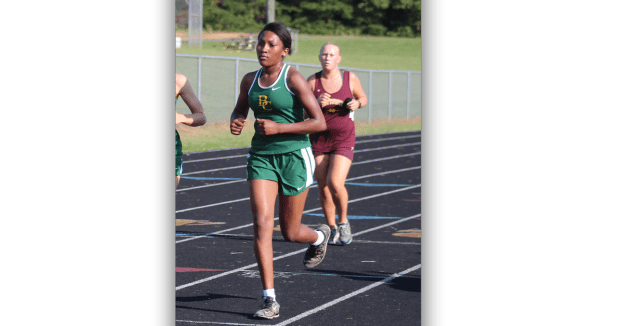 Buckingham junior Jayda Chambers is an all-district runner for her team this year and has been a quiet leader (photo by Lyla Wood).

Winners of all ages on the trail

Each squad demonstrated its successful status with impressive performances at the James River District Championships on Wednesday at Occoneeshee State Park.

All-district runners for the Lady Knights included senior Alyssa True, who came in fourth, individually, in the girls’ 5K race, and junior Jayda Chambers, who came in seventh. True finished in 22 minutes, 42 seconds, and Chambers had a time of 23:15.

Reflecting on the teams’ performance this season earlier in October, Heslip said, “Of course, I’m really pleased. I’ve got a lot of hard workers. They’re smart kids. And in order to be a runner, you have to be very self-disciplined.”

In what Heslip said was probably the pinnacle of the season for the boys team, the Knights defeated host Goochland High School by three points Oct. 18.

The Buckingham teams have a variety of standouts, both young and older.

Heslip noted that True is in her first year running cross country, but she is the fastest girl on the varsity team.

The coach said senior captain Tiyahna Grammer, an honor student, has run all four years of high school and has improved each year.

Junior Jayda Chambers is what Heslip described as an “amazing all-around athlete” who is always one of her top three runners.

For the boys team, Moore is participating in cross country for the first time, but Heslip said she expects him to make it to the state level of competition in the postseason. She said he is a natural runner, and she is expecting many great things from him.

Caldwell, a senior captain, is in his fourth year on the team and one of Heslip’s top 10 runners. Caldwell is a great leader and an honor student.

The coach described Meek and Martin as her dynamic duo — consistently placing among her top 10 runners for the boys and possessing much heart.

Crews drew praise from Heslip for being the second-fastest young man on the team. He is in his first year running.

Showing that the future is also bright for Buckingham, two of Heslip’s most promising runners are eighth-graders whose scores cannot count until they become freshmen. These runners are Ressa Smith and Ethan Williams.