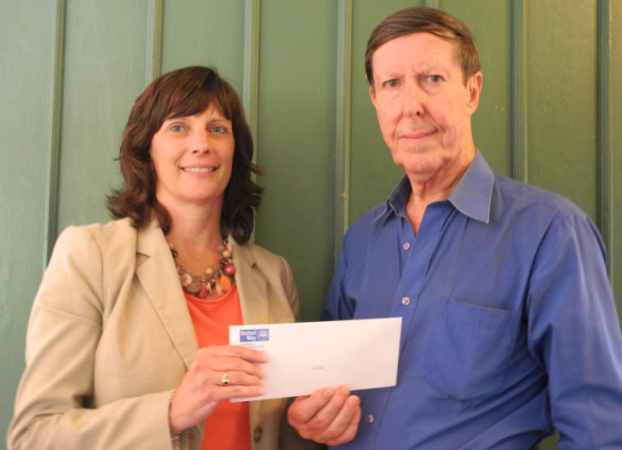 Standing from left, Sandy Cooke with the United Way and Ellery Sedgwick with FACES.

The United Way of Prince Edward County distributed $12,000 to its 20 partners during a luncheon at the town’s train station recently.

According to a press release, it was the group’s second and final distribution for the fiscal year.

“Still this has been our second largest amount of money that we’ve raised in my memory,” said Rucker Snead, president of the united way’s board of directors in the release. “So we need to celebrate.”

The release cited this was also the second straight year that the United Way raised more than $45,000.

Snead noted that more than 94 percent of the funds they raised were distributed to partners.

Those wishing to donate can still do so. The United Way’s website is uwprinceedward.org.

“The group’s fundraising effort for next year will begin in the fall, with its letter to potential donors expected to go out in October,” officials said in the June release.

“The United Way is also looking for additional members to serve on its all-volunteer board. The goal is “to make sure we represent our county,” Snead said.

Beginning next year, the organization will begin focusing on education, income and health, but Snead assured the representatives of the partners that they would not be forgotten as they continue to provide needed services.

The release cited the United Way continues to try to work closely with its partners and synchronize fundraising efforts, and do a better job of marketing. In addition, the United Way is encouraging its partners to take advantage of the more than 6,000 local college students brought in town by Longwood University and Hampden-Sydney College.

“At Longwood University all students are required to do internships,” Snead said in the release. Adding that while internships are not required at H-SC, they are “highly encouraged” as the students are “encouraged to give back to the community.”

According to the release, the United Way is the world’s largest privately funded nonprofit, engaging people from all walks of life in nearly 1,800 communities across more than 40 countries and territories. Among its partners are global, national and local businesses, nonprofits, civic and faith organizations, as well as educators, labor, health organizations and governments.

The release cited locally, the group makes contributions to a wide variety of organizations that have missions to support the residents of Southside Virginia. Among these organizations are the Boy and Girl Scouts, Meals on Wheels, FACES, Virginia Legal Aid Society, Heart of Virginia Free Clinic and Southside Society for the Prevention of Cruelty to Animals. The full list of partners can be found at the web

Second-generation members of the Young Men’s Social Club in Cumberland County are working to continue the community service and camaraderie... read more