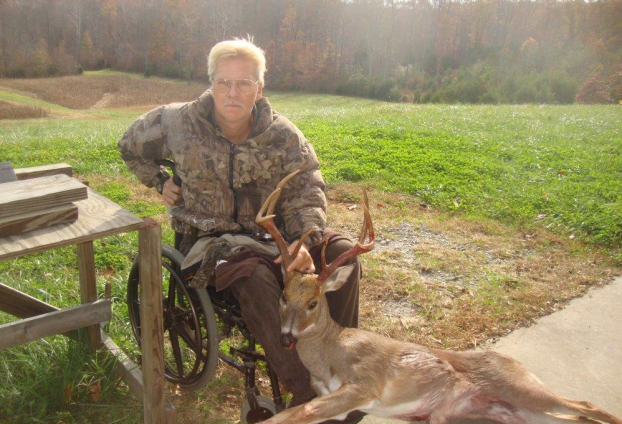 Karl Schmidt holds an eight-pointer bagged on his land in Prince Edward County during muzzleloader season.

Having started my life of whitetail deer hunting in the late 1960s in southern Maryland, eventually drifting to its Eastern Shore where the sika deer abounds, deer hunting there does not compare to the deer hunting I’ve come to know in Virginia.

Most Maryland counties permit the use of shotgun slugs only and would not dream of using dogs. Maryland deer hunting was mostly in swamp country where hip boots were a must. Here in Virginia, conventional leather boots work fine in most places. As far as deer habits however, they are pretty much the same between Maryland and Virginia.

Once the cool breezes of fall start to blow and the scent of the fall woods fills the air, most avid deer hunters want to head out with that bow and try to get that early, less wary, buck within bow range. Many early fall hunts can be successful, especially if there is access to good places.

Still, that tempting month of October can be very disappointing. October looks and feels so right for deer with the first frosts and leaves falling. Decades of deer hunting have proven, however, it’s the month of November that defines good deer hunting.

Those big cautious bucks depart from their careful ways once that November rut kicks in. During November, there is no “prime time” to be in the woods, be it early in the morning or late in the evening. All day long is “prime time” when those bucks are in deep rut.

During the month of November, a nice buck can be seen at any time of the day and in the most unexpected places. Depending on where a hunter can go and how much time can be given toward hunting, November can be intoxicating and yet deceiving. November doesn’t last forever.

Seeing deer so often being teased by glimpsing antlers day after day becomes the norm. Yes, there can be those warm-day exceptions when higher temperatures will make deer slow or stop. They are wearing their “winter coats” by November, and a warm day for them would be like a man running track in summer with a parka on. For those cool gray or rainy November days, a hunter would do well to spend the entire day in the woods.

After becoming used to and expectant of rubbing elbows with deer all through November, the day comes when the calendar flips to December and the flurry of deer activity hits a brick wall. A week or so into December and the world has changed for the “still” deer hunter.

The November deer utopia is over for another year, and the only thing the December and January deer hunter can do is freeze and recall how good things once were during that rut.

Karl Schmidt is an avid hunter who lives in Prince Edward County. His email address is tenbears@centurylink.net.