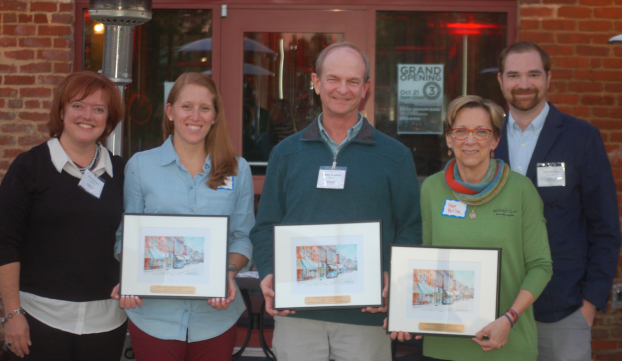 The Downtown Farmville Partnership held a volunteer appreciation event at Third Street Brewing Co. on Thursday that approximately 70 volunteers attended. The event included food, door prizes and recognized the Volunteer of the Year for 2016 and 2017 as well as a recipient of the inaugural President’s Award.

Jimmy Johnson, treasurer of the partnership, received the award.

“It’s very fitting because of his long time serving Farmville and the downtown partnership. He’s been working tirelessly to promote the idea of Main Street in Farmville ever since the beginning, even before we became an official Main Street community in 2012,” McGuire said. “He comes to our board meetings and makes sure that all of us are performing exactly the way we need to be and everything’s done to a T, which means he makes us behave.”

“I appreciate all the support everyone’s given us, where we are today and where we hope to be in the future,” Johnson said regarding the partnership.

“While she was a member of our board, she was the chair of our design committee, and in addition to the Warehouse triptych mural that you might notice at the farmers market, Pam was also instrumental in helping us facilitate the Two-College Town mural that is at Third and Main street,” said John Burton, the partnership program manager.

Kaitlyn Kayton received the 2017 volunteer of the year award.

“Kaitlyn is a tireless worker, she’s worked with us for over two years now and in particular she served as the race director for the High Bridge Half-Marathon and 5k,” Burton said. “And overall she has just helped us to stay on course and make that event a real success, so we owe her an enormous amount of gratitude.”

“All of the stuff that the (Farmville Downtown) Partnership does, it is all because of our volunteers, and that goes from the board of directors who come to meetings to people who serve on committees to people who come and help out at all of our events, you know, moving boxes and putting up tents and all sorts of stuff,” Burton said. “So lots of different people at lots of different levels and everything we do is all because of those volunteers.”

A dedication was held Friday for the Andy Taylor Center for Early Childhood Development that included comment from Longwood University... read more