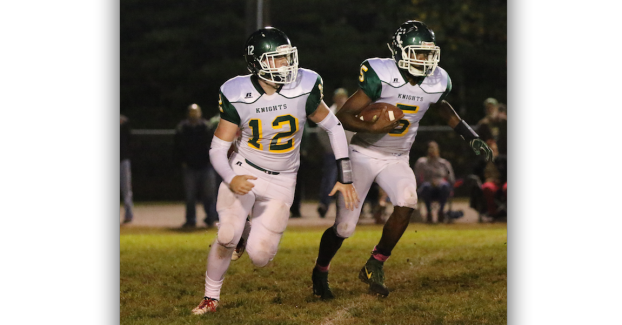 The Knights led 35-0 at halftime and more than doubled that output in the second half to win 84-21, setting the school varsity football record for most points scored in a game.

“We came off a bye week,” Buckingham Head Coach Josh Wallace said. “We were healthy; we were only missing one guy. We were prepared for it, so we came out and played hard, and the kids, they performed very well.”

On the other sideline, the loss was a discouraging one for the Dukes, who are still looking for their first win this season.

“I’ve been spending the weekend trying to figure out what positives we can take from this,” Cumberland Head Coach Edgar Knapp said Sunday evening. “There are always positives, and I told the kids at the end of the game on Friday night that ‘yeah, tough loss, we got beat bad, it was homecoming, but you only get one loss for the game.’ There’s always another game to play, and we’ve got three more to play. We’ve got a playoff game that we’re going to have to play after that, and we just have to figure out what it is that’s going to help us get over the finish line as far as winning and find that and get it done.”

Friday’s victory was Buckingham’s second of the season, and Wallace refrained from pointing to anything in particular strategy-wise or scheme-wise that led to the 63-point win.

“I just think that in every phase of the game, the kids just, they played really hard, they played very well,” he said. “They just executed. It wasn’t really one thing. … We kicked it off, and then their first play of the game, we hit ‘em, and they fumbled it, and we picked it up and scored it. It was just that kind of night for us.”

Acknowledging that first-play-from-scrimmage fumble, Knapp said, “That sort of stuff just takes the wind out of you, especially when you’re struggling.”

Senior Nicholas Hartwell was the one who recovered the fumble and returned it for a score.

Kyle went 10-for-18 passing for the game for 66 yards and a touchdown. Senior Darron Ridley had five carries for 38 yards.