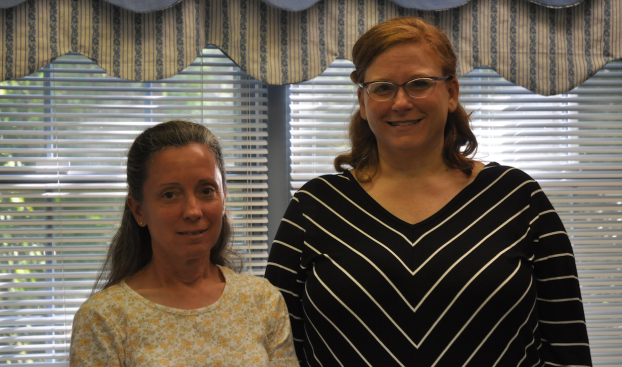 Pictured is Alma Cornell, left, with Robin Sapp, librarian with Cumberland County Public Library. Cornell often studied at the library to obtain her nursing degree, which she recently received this year (photo by Emily Hollingsworth).

Back in 2013, Alma Cornell saw an opportunity.

Her two sons were growing older, and she was no longer needed as much at home.

Her sister had recently graduated from nursing school, and Cornell became inspired to further pursue her own career, having been a Certified Nursing Assistant and an EMT for the Cumberland County Volunteer Rescue Squad.

“I decided to go for it,” said Cornell, who enrolled at Southside Virginia Community College (SVCC) in pursuit of an associate’s degree in nursing.

Cornell, who turned 50 in February, credited Cumberland County Public Library as being a needed resource as she worked to obtain her degree.

She recently graduated with a class of about nine from the SVCC nursing program and began a job at Centra Southside Community Hospital in Farmville.

Cornell said she works on the hospital’s third floor in the medsearch telemetry wing. She said the telemetry area studies cardiac activity for patients wearing heart monitors. At the time of the interview, she worked the night shifts from 7 p.m.-7 a.m. She said while she was being trained to work in the department and was still adjusting to the new schedule, she has enjoyed the experience.

“It gives me a worthwhile thing to do,” Cornell said. “It also contributes to the family economy, and it’s something I enjoy doing.”

She said she took classes for two years to complete prerequisites for the nursing program and the remaining two years in the program itself.

She said she’s visited the library since she was a child, and she and her sons, when she home-schooled them, were frequent visitors.

“It was just an outstanding service for me and for my family,” Cornell said.

Cornell said that at one time, she and her two sons were enrolled at SVCC together. She said the three of them would come to the library to study.

Library Director Robin Sapp said Cornell was one of the first patrons of the library she met when she started her post last February.

Sapp said she had always admired Cornell’s determination and work ethic, which came through when she visited the library.

“Nursing is not easy,” Sapp said. “I think what I saw in Alma is persistence.”

“She was studying, and I said, ‘Well, when I see you next time, if I see a smile on your face, I’ll know that everything went well,’” Sapp said.

“I said ‘Did you take your test?’” Sapp said. Cornell told her yes and started smiling.

“That’s it,” Sapp said. “That’s the achievement you want to reach — all that hard work paid off. She was always here and stuck to it.”

Hampden-Sydney College’s Bortz Library is a special place, and its stellar track record of high regard continues as it is... read more