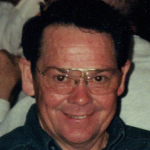 George, along with his son Jeff, operated Perkins Electric Company in Farmville for over 40 years. In addition to electrical, plumbing, heating and air-conditioning, he had many other talents including carpenter, mechanic, farm, dog trainer and gunsmith. There was very little he could not do. He was an avid outdoorsman who loved all types of hunting and fishing. He also shot competition skeet on the Virginia circuit and won many awards.