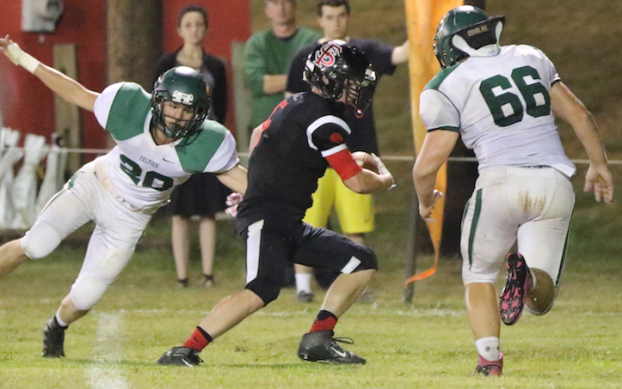 Fuqua School senior Clay Osborn adds yards after the catch against visiting Roanoke Catholic School on Friday night. The Falcons lost 14-7, but Osborn helped keep the game so close with strong play on both sides of the ball (photo by Titus Mohler).

Fuqua School’s varsity football team did not come away with a win Friday night, but it showed it belonged with the defending state champion Roanoke Catholic School Celtics, falling narrowly 14-7.

The undefeated Celtics entered the game averaging 47 points a game while defeating their opponents by an average of 42.2 points. They are ranked No. 1 in the Virginia Independent Schools Athletic Association (VISAA) Division III state ratings, and the Falcons are ranked No. 2.

Friday’s contest in Farmville was tied 0-0 at halftime.

“They were pretty tough; we were pretty tough,” Fuqua senior quarterback/linebacker Billy French said. “No. 1, No. 2 — it was just what you could expect between that good of competition, and we’ll see them again, definitely.”

Roanoke Catholic scored touchdowns on a couple of long run plays. The first score came nearly four minutes into the second half on a 70-plus-yard dash. The Celtics ran in the two-point conversion and were later able to go up 14-0 on a 40-plus-yard touchdown run.

Falcons Head Coach Ben Manis said he felt pretty good at halftime, though he said it is a little frustrating when you can’t move the ball.

“And they move the ball well,” he said of the Celtics. “We stiffened up when we needed to. We had a missed field goal; they had a missed field goal. So again, you take away two long run plays, and it’s a different game. They get you with some confusion in the backfield, but we played it as well as we ever have in the past. In the past, (when) they’ve beat us before, it’s been by 35 or more.”

Last season, Fuqua lost 54-11 to Roanoke Catholic in the regular season and 52-30 in the VISAA Division III state semifinals.

Manis indicated that the closeness of Friday’s game came down to toughness. He added that the Falcons also had a bit of a spark thanks to the full-time return of French, who has been either limited or out due to a stress fracture suffered during the preseason.

“He’s a heck of a leader,” the coach said. “He’s kind of beating himself up about this game, because these guys, they really want to play Catholic. Catholic’s been the top dog. They want to beat ‘em. … You can’t be the man till you beat the man. And that’s kind of the mentality that they took. We’ve really changed up our scheme this year defensively from what we had done in the past that really does fit our personnel better. And it’s something that helped us against Roanoke Catholic. It stinks to lose like this, but the whole time, we had a chance. We stopped them several times, and they had a couple fumbles that just got lucky that they recovered them.”

The Celtics had a total of five fumbles Friday but lost only one of them. In that one instance, they were able to get the ball back a few plays later via an interception.

“The problem is that we know these guys, and they know us very well,” he said. “Imitation is the highest form of flattery, and they were trying to do some of the things that we do, just fitting their scheme and personnel. We’re kind of in each other’s heads. We know each year that both teams are going to be well-coached, both teams are going to be in it for the most part just depending on the personnel you have on the field.”

He noted that Roanoke Catholic benefits from having 30 players.

“We had a lot more guys going both ways or on special teams as well,” Manis said. “When you can rest two or three or four guys or five guys, that makes a big difference at this level.”

The Falcons were able to make the score 14-7 with four minutes and 20 seconds left in the game after French scored on a three-yard run. Next, they attempted an onside kick, but the Celtics recovered the ball and were able to run out the clock with the help of their powerful run game.

For the night, French went 10-for-17 passing for 152 yards and an interception, and he had 13 carries for 28 yards and a touchdown. Senior running back Benjamin Bailey also struggled on the ground, gaining only 17 yards on 15 carries, but he enjoyed some success in the receiving game, leading the team with four catches for 61 yards.

Falcons senior Clay Osborn had three catches for 54 yards and drew praise from Manis for his play on both sides of the ball.

“He had a great game … offensively, then he had a big interception down here that helped a whole lot,” the coach said.

Manis does not expect to be without senior Warren Dabney moving forward, but he said the senior offensive/defensive tackle had a little bit of a cramping issue that limited his play Friday.

“That really hurt us late in the game, both offensively and defensively,” the coach said, noting that Dabney plays every play except for kickoffs and punts.

Manis said it will be interesting to see how his team responds to its loss to the Celtics.

“We’re kind of primed again to see each other in the playoffs if you kind of look at everybody else’s schedule and everybody else’s ability that’s in our division,” he said. “… It’ll be interesting if and when we see them again. I hope we see them up there in the state championship game, and we get it. I’d love to come off that field a victor with these kids. They’ve worked so hard for it. The guys who graduated before them worked so hard for it, and our fans and our parents, just everybody at the school’s hungry for it.”

But Manis emphasized that this is the long-term goal, and the focus now is on the next game.

The Falcons (3-2) visit Richmond Christian School on Friday at 7 p.m.

There are a couple of changes to how The Farmville Herald’s Football Contest is being administered this year. The games... read more