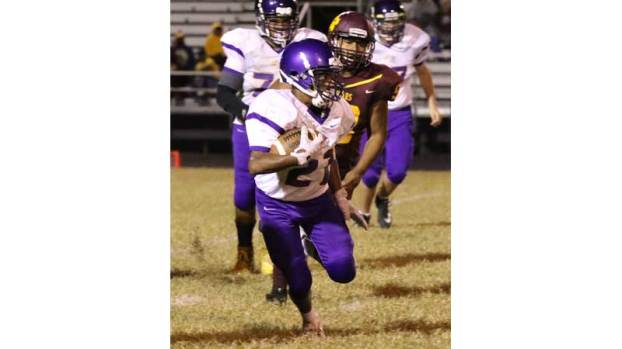 Prince Edward County High School’s varsity football team was aiming to get its winning season back on track Friday night, but it didn’t happen, as host Nottoway High School jumped out to an early lead and celebrated its homecoming night with a 58-12 victory.

The loss dropped the Eagles to 4-4 on the year.

The Cougars started the season with three losses to tough opponents who presently have a combined record of 21-4. Since then, Nottoway has won five straight.

As for whether or not the Cougars did anything to surprise the Eagles, Ford said, “They came out early in a spread, which we didn’t see on film, but other than that, no. They came out, and they’re a good team running the rock. They threw the ball a lot more than we saw on film, but either way, we still have to defend it.”

“He got hit early, and he couldn’t come back in,” Ford said. “He was definitely in pain, because he’s definitely one of the toughest kids that I’ve been around in a while, and if he’s out, he really got nicked up.”

Junior running back Rahme Marshall also appeared hobbled after the game and finished with only five carries for 12 yards.

“He got nicked up early,” Ford said, but he noted that another junior running back helped out by stepping up. “Jarrel (Robinson) ran well. … The line blocked, but hats off to Nottoway. They were physical at the point of attack, and they made plays.”

The Eagles were coming off of a startling 87-46 homecoming loss to visiting Central Lunenburg High School on Oct. 13 and have now lost three out of their last four games after starting the season 4-1.

“We just need to work,” Ford said, addressing his feelings on what needs to happen at this point. “We need to just get better, work on getting better every snap, every play, every rep. Just everything we do we just need to get better at. And Goochland’s coming to town, and they’re top dog right now. And if we want to match them and we want to come out and play our Senior Night and get a win on that night for our seniors, we’ve got to match them.”

He was happy to point out some positive things he took away from Friday’s game against the Cougars, noting that young guys came in and stepped up.

“Like I said, Jarrel did a great job running the rock,” he said, after Robinson gained 56 yards on 11 carries.

Senior quarterback Zion Lewis led the team with 12 carries for 65 yards. He also went 8-for-18 passing for 107 yards, one touchdown and one interception.

Ford said that receivers made plays when they had the ball in their hands.

In the second quarter, junior wide receiver Rah’Quan Payne helped cut the Cougars’ lead to 21-6 by hauling in a 20-yard touchdown pass from Lewis. Payne finished the game with a team-high four catches for 64 yards and a score. Senior wide receiver Aneal Walker gained 28 yards on three receptions, and junior wide receiver Tajh White had one catch for 15 yards, and he returned a second-quarter kickoff 80 yards for a touchdown, making the score 37-12 at halftime.

Ford indicated that senior Zeb Gaines made his presence known.

“So, there’s some things we can build on, always,” Ford said. “… We’ve just got to come in Monday with a good mindset and ready to play.”

The coach said the big point of emphasis in practice this coming week would be just getting better, play by play, focusing on the fundamentals of football like tackling and blocking.

“We go back to square one as far as our week goes and just put in our stuff, and then get ready for Goochland,” he said.

The Eagles host Goochland High School (8-0), the top team in the James River District, on Friday at 7 p.m.