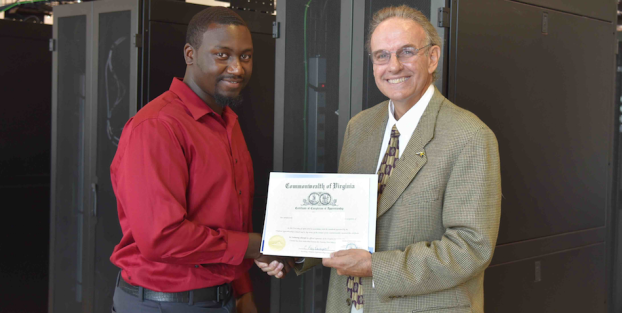 Pictured are, Matthew Hamlett, left, and Maynard Stowe from the Department of Labor.

More than a year ago, Matthew Hamlett was looking for a job. His outlook did not seem promising but still, he had to find a job. According to a press release, he drove to the South Boston Workforce Center praying someone there would help. His simple plan, file for unemployment and look for a job. Uncertain on what to expect, he quickly realized the benefits available to him at this community resource center.

“Connecting with two individuals at the center answered Hamlett’s hopes. The first was a caseworker with (Workforce Investment and Opportunity Act), Kris Tuck, and the second was the Apprenticeship Coordinator for Southside Virginia Community College (SVCC), Kelly Arnold,” officials said in the release. “The two shared programs that would open doors for a career that he had never considered.”

The release cited his first step was to enroll at SVCC in the Industrial Maintenance program with a concentration in electrical and HVAC.

The release cited that the SVCC apprenticeship program works directly with the Department of Labor and Industry (DOL).

“Maynard Stowe, the DOL representative, registered Hamlett as an Industrial Maintenance Technician, and outlined the requirements needed to combine on-the-job training in the amount of 2700 hours, with SVCC classes,” officials said in the release. “Hamlett willingly accepted the task: long days at work, followed by long nights in the classroom, but soon it began to pay off.”

“It seemed as if what I learned in the classroom lined-up with the exact project we were working on at the data center”, said Hamlett in the release. “In fact, this encouraged me to study more because I knew I would see it the next day at work.”

Many hours, and many SVCC classes later, he earned his Apprenticeship card as an Industrial Manufacturing Technician. While many cheered at his accomplishment, he said that this was not the end of the journey.

“I am still taking classes in the evening and plan on graduating with my associate’s degree in May, 2018,” officials said in the release. “From there, I want to pursue a degree in Engineering, and yes, still working full time at a great job, surrounded by encouraging mentors, in a career pathway I never considered.