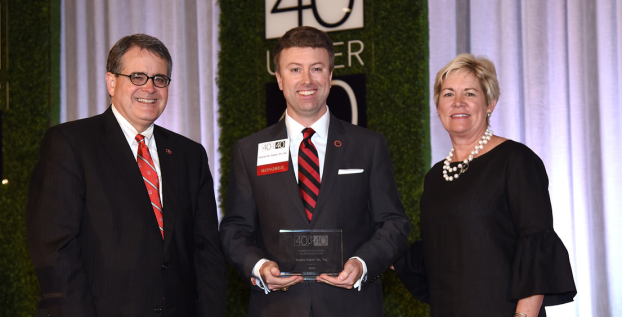 The University of Georgia (UGA) Alumni Association recently unveiled the members of the 40 Under 40 Class of 2017. This program celebrates the personal, professional and philanthropic achievements of UGA graduates who was are under the age of 40. The list includes James Blair Gates, who born and raised in Farmville and is a 1997 graduate of Fuqua School. He is the son of Dr. James Bruce Gates, and the late Dianne Blair Gates, of Rice. James Bruce is a 1966 UGA graduate of the College of Veterinary Medicine.

The honorees were recognized at the seventh annual 40 Under 40 Awards Luncheon on Sept. 14 at the Grand Hyatt in Atlanta. Ernie Johnson, a 1978 UGA graduate and co-host of TNT’s “Inside the NBA,” served as keynote speaker for the event.

“Announcing the honorees each year is exciting,” said Meredith Gurley Johnson, executive director of alumni relations, in a press release. “It is more difficult every year to narrow the list down to 40, and that is a testament to the caliber of our alumni.”

According to the press release, James graduated from UGA in 2001 with degrees in political science and communications, and earned his master’s degree in Public Administration in 2004.

“He was active on campus serving as president of his fraternity and vice president of the Interfraternity Executive Council,” officials said in the release. “He played midfield on the lacrosse team, and was initiated into Gridiron — one of UGA’s oldest secret societies.”

The release cited upon graduation he joined the Piedmont Healthcare Foundation as a director. In 2012 he helped launch the tech company, FotoIN, eventually becoming the company’s chief operating officer. James joined Bell Oaks Executive Search as an associate partner in 2015. He was promoted to partner in October 2016.

“Outside of work, he is active with Holy Innocents’ Episcopal Church and coaches his children’s sports teams,” officials said in the release.

“It is remarkably humbling to be selected by my alma mater for this honor. It has significant emotional meaning to me and my family,” said Gates in the press release. “I am grateful to the UGA for offering me an opportunity as a kid from Farmville. As the son of an alumnus, UGA has always been a focal point in my life. I share this recognition with my wife, Elizabeth, my father Jimmy, my late mother Dianne, and my siblings Beth and Sly.”

More than a year ago, Matthew Hamlett was looking for a job. His outlook did not seem promising, but still,... read more