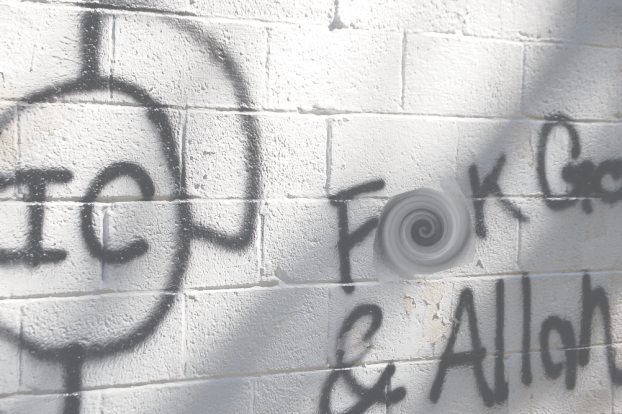 Pictured is the vandalism sustained at the Islamic Center of Prince Edward County on Sept. 27. A news release from The Council on American-Islamic Relations (CAIR) highlighted the incident and urged state and federal law enforcement to investigate. (Photo by Emily Hollingsworth)

Graffiti with expletive language was discovered on an exterior wall of the Islamic Center of Prince Edward County’s mosque, located at 300 N. South St., at about 10:30 a.m. Wednesday morning.

The graffiti, in black letters, includes a four-letter expletive starting with the letter “F,” followed by “God & Allah.”

The graffiti also has the letters “IC” with a circle around the letters and two shapes drawn on opposite sides of the circle.

“That remains under investigation,” police said when asked if they considered the incident a hate crime.

Police on scene and Latif said there did not appear to be evidence of a suspect or suspects having entered the building.

Latif, who was on scene, said she was shocked as the center had not experienced vandalism in the past.

“We have been here for over 20 years and never had an issue,” Latif said.

According to police, officers “responded to a report of vandalism at the Prince Edward Islamic Center. This incident is currently being investigated by the police and anyone with any information can call Det. Sam Entrekin at (434) 392-2127.”

Patsy Watson, an organizer of the Interfaith Collective in Farmville, issued a statement following the incident, calling for action in response to the vandalism.

Watson said the collective is raising funds for a security system to be installed at the center.

“Lift our brothers and sisters up in prayer as they deal with the confusion and sorrow that is experienced when vandalism such as this is directed at them,” Watson said in the statement.

Q: What’s The Heart of Your Adventure and what does it have to do with “Find It In Farmville?” The... read more