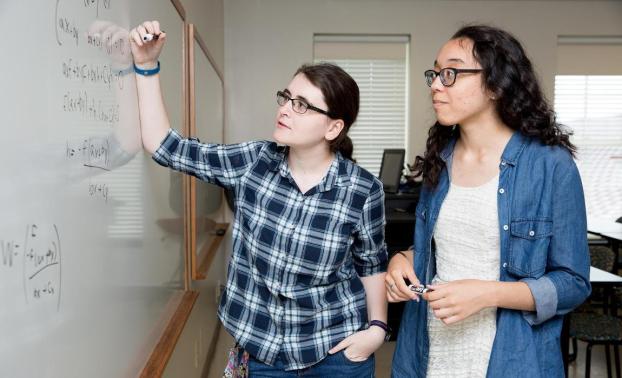 Proving they are true scholars, Nicole Marzolf and Breana Figueroa, both math majors and members of the Cormier Honors College at Longwood University, have found their research with Lorentzian geometry fun.

“I like being challenged. I knew going in that it would be challenging,” said Marzolf in a Longwood press release. “This project involves a solid amount of work, but there’s a satisfaction that we’re able to play with a problem and get an answer.”

The pair’s research in the PRISM program combines Lorentzian geometry with a form of linear algebra known as Lie algebra. The press release cited that it’s a continuation of a project from last summer, one of four PRISM projects that Dr. Tom Wears, assistant professor of mathematics, has directed since he began researching this topic in 2014.

“Lorentzian geometry is interesting to learn. It’s fun thinking about these things in a different way,” said Marzolf. “Dr. Wears gives us a problem and we have to play with it for a while. It’s hard, but he helps us when we get stuck.”

Figueroa and her partner work collaboratively on a whiteboard in a classroom.

“We like to bounce ideas off each other,” she said, which Wears considers a good approach.

“Students are less hesitant, less reserved, about discussing things with each other,” Wears said. “And I like to discuss things with them. I like not just written but also oral results. I want them to give me the simplest representation from something that’s abstract.”

Wears said in the release that the students have to rely on some geometric insight, but they’re doing really well.

“Lorentzian geometry is new to them; it’s not something that undergraduates are exposed to. I’m trying to sharpen their instincts with two- and three-dimensional examples,” Wears said. “The goal is to get them out of a textbook.”

Figueroa plans to be a secondary math teacher, and Marzolf is considering teaching on the university level or working in the Navy’s nuclear program.

“I’m going to grad school, and, thanks to PRISM, I will understand how research works,” said Marzolf, who will do research this fall on mathematical physics under Dr. Michelle Parry, associate professor of physics.

Wears plans to eventually put the pair to work on examples that even he hasn’t yet solved.

“In a few weeks, they’ll be on their own — swimming upstream and probably gasping for air,” Wears said in the release.

Every summer morning, dozens of miniature shoes pad through the doors of Longwood Speech, Hearing and Learning Services (SHLS) and... read more