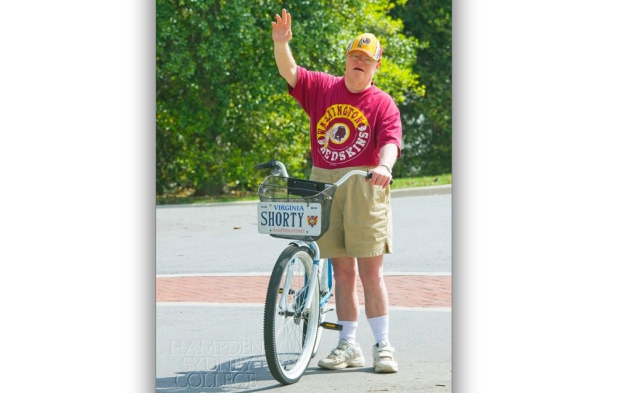 Walter “Shorty” Simms was an ardent supporter of Hampden-Sydney athletics and was described by President Dr. Larry Stimpert as being the very model of a good man and a good citizen (photo provided by Hampden-Sydney College).

One of the greats from Hampden-Sydney College’s (H-SC) storied history was lost Aug. 31 with the death of Walter “Shorty” Simms.

Born in 1946 with Down syndrome, he came to live at Hampden-Sydney with his parents in 1973, as noted in a school press release. His father, Dr. Gilman Simms, was H-SC’s first athletic trainer, and through this connection, the door was opened for Walter to become immersed in the world of Hampden-Sydney athletics.

College officials said that “Shorty was for many years a mainstay at Tiger athletic events and on the campus of the college he loved. He was the Tigers’ most loyal cheerleader and supporter for many years on the sideline of football games and in the locker rooms of Hampden-Sydney athletic teams.”

After his parents died, he continued to live on campus with his brother and sister-in-law, both of whom are named Scott Simms.

Mrs. Simms said what helped Walter develop a desire to support the school’s athletic program was his acceptance by H-SC students and athletes.

A key word used to describe Walter by those who knew him was “unconditional.”

Mrs. Simms noted he loved the people of Hampden-Sydney unconditionally, and he prompted a similar response from them.

“They didn’t see him as someone with special needs,” she said. “They saw him as a brother. And that’s what Hampden-Sydney is all about is the brotherhood and the fellowship.”

As stated in the college’s release, “In addition to cheering on Tiger athletes from the sidelines, Shorty offered physical support as well, helping the grounds crew line H-SC athletic fields and prepare the football stadium for games. At different times, he could also be found repainting the walls in the former Gammon Gymnasium, washing uniforms in the football locker room or lending a helping hand in the campus post office.”

The release also highlighted the 2003 film name “Shorty” that depicted the 2002 football season at Hampden-Sydney, during which Shorty was inducted into the college’s athletic hall of fame.

“I’ve always felt that Shorty helped win football games for us,” said Tigers Head Football Coach Marty Favret, who joined the H-SC football program in 2000. “His spirit and passion for everything we did was contagious amongst my players and staff.”

Walter impacted coaches, players, faculty, staff and in the case of Joe Sheridan, even parents of H-SC student-athletes.

“Walter was unconditionally kind,” said Sheridan, whose son played basketball for the Tigers from 1994-98. “There was no compromise.”

Sheridan formed a strong friendship with Walter that endured.

The college’s release noted that the life expectancy of individuals with Down syndrome is 55 years. Walter lived to 70.

Sheridan said, “If we could harness what went on in Walter’s mind and heart, it wouldn’t be the tumultuous world that we live in. He was brilliant, brilliant. So, I miss him.”