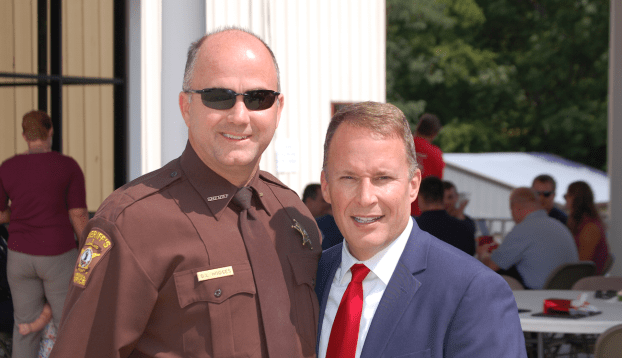 First responders and members of New Life Church in Farmville united to honor those who serve the community through emergency response. Cumberland Sheriff Darrell Hodges, left, pauses for a photo with New Life Pastor Bill McIntosh (photo by Emily Hollingsworth).

First responders, during a morning service held by New Life, were invited to share communion and hear a service encouraging them.

Each first responder received a gift bag and a framed Valor Award certificate, honoring them for their service.

Farmville Mayor David Whitus addressed the audience during the service. He noted the recent events in Charlottesville, and said among the tragedies, stories of courage and sacrifice have come from first responders.

“What we’ve seen coming out of these events is sacrifice,” Whitus said, addressing first responders in the audience, “and (what you do), ladies and gentlemen … every single day (is) you serve. You give. You sacrifice.”

Whitus thanked first responders for their service, encouraging citizens to follow the example set by their sacrifices.

“I would issue the challenge: Be like them. Be the hands and feet. Serve until it hurts, until you feel like you’re sacrificing. You’re giving up something to serve others,” Whitus said.

New Life Pastor Bill McIntosh noted during his sermon that first responders locally and across the country understand sacrifice, noting dozens of people who developed illnesses after working the grounds of the World Trade Center’s Twin Towers following the Sept. 11, 2001 attacks.

“We desperately need people in our world whose courage comes from principles and convictions,” McIntosh said, noting he has spoken with people in law enforcement who have gone to work and were unsure if they would come home to their families at the end of the day.

“You sacrifice your lives on a daily basis … It’s a calling, it’s a ministry to the community, and I want you to know how much we appreciate your ministry to our community.”

Following the service, first responders and their families were invited to enjoy a free lunch.

McIntosh said the event began last year when the anniversary of the Sept. 11, 2001 terrorist attacks in New York, Washington D.C. and Pennsylvania fell on a Sunday. The idea for the event came as the congregation worked to find what could be done locally to honor first responders.

He said the event is also meant to honor first responders in the area for their service during times of conflict or uncertainty between law enforcement and citizens.

“We wanted to make a loud and long statement that we love and honor our service members,” McIntosh said.

Cumberland County Sheriff’s Office Deputy Frankie Lampkin said after the service that the event was a unifying experience between citizens and members of law enforcement.