Pokeweed is an amazing plant 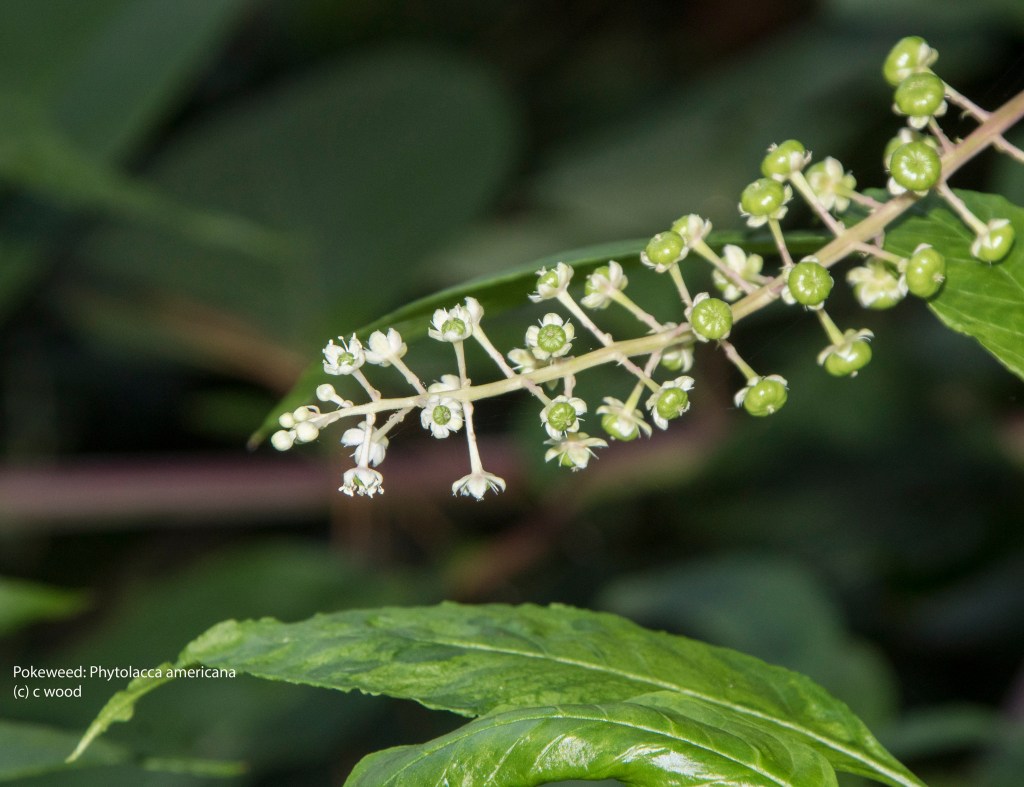 The pokeweed plant has flowers, immature fruit and even mature fruit, all on the same stem.

It’s been immortalized in song, grown at Kew Gardens as an exotic, used to make ink, eaten as an early spring green and is a favorite of more than 30 species of birds. What is this miraculous plant? It’s pokeweed, also known as pokeberry or poke sallet, a weed that originated here, not in Asia or Europe.

The common name poke comes from the Algonquin word pokan meaning bloody as the purple juice of the berries is quite dramatic looking and makes a very effective dye or ink. According to legend, the Declaration of Independence was signed with pokeweed ink, but unfortunately that’s not true. It was signed with iron gall ink.

What’s not to like about a plant that seems to do everything? Quite a bit. Pokeweed is a strong, vigorous grower with large leaves, deep burgundy-colored stems at maturity and clusters of small flowers and fruit, which appear all at the same time on the same cluster. It also has a sturdy taproot that makes this plant able to survive just about all onslaughts. Cut it down, dig out as much of the root as possible and next year it will be back again.

Pokeweed has long been one of the iconic components of early Southern cuisine. Settlers collected the early spring shoots, before the stems turned red, blanched them in several changes of water and sautéed them with bacon fat. Until the early 2000s, it was possible to buy canned poke greens in the deep South, and several years ago, a Southern food festival offered pokeweed fritters with Benton ham. Nevertheless, pokeweed is poisonous. The youngest leaves and shoots contain the smallest amounts of toxins and the repeated boiling removes many of them.

In his new book “The Cooking Gene,” Michael Twitty notes that older generations used pokeweed for “cleaning you out from your head to your feet.” There are powerful toxins in pokeweed that make small doses of the plant an effective vermifuge; consume more and you just might die or wish you had. Even deer prefer not to eat pokeweed.

No matter how poisonous or tasty pokeweed is, I bet that you have at least one rogue plant (Phytolacca americana) growing somewhere in your garden and that you’ve been waging silent, but fierce, war with it for several seasons.

Apparently, the British are now becoming conflicted about the desirability of pokeweed. While the Royal Horticultural Society is still providing growing instructions, homeowners are less than enthusiastic when it appears uninvited in their gardens. A recent writer to the gardening editor of the Daily Telegraph wanted to know the identity of a “very imposing mystery arrival … with sinister-looking berries” that had appeared in his garden. Yes, pokeweed. Apparently it’s morphed from an interesting specimen plant to a potentially scary pest in England.

I have several large pokeweed plants growing along the back fence in my garden. It’s not sinister looking. In fact, it reminds me of my childhood when I made poke berry wine to go with the delectable mud pies I baked in my outdoor oven. No one ever told me that the plant was poisonous or seemed the least bit worried about what I was doing. It never occurred to me to taste it. And so, I leave several towering plants for the birds to enjoy in the fall. I know I’ll regret my decision in spring, but I secretly like this plant. Pokeweed is a southern classic.

Cynthia Wood is a master gardener who writes columns for The Herald. Her email address is cynthia.crewe23930@gmail.com.