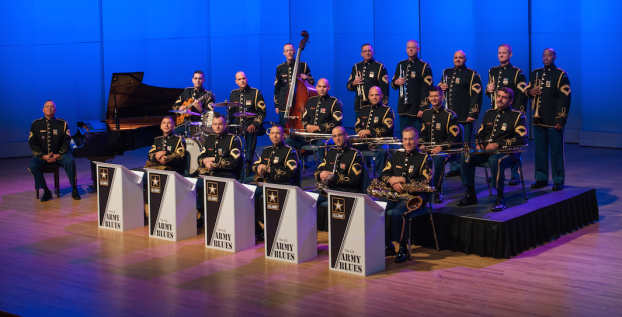 The Longwood University Department of Music will host a concert by the United States Army Blues, an 18-piece jazz orchestra based in Washington, D.C., Sept. 18.  The program is free and open to the public. It will take place in Jarman Auditorium at 7:30 p.m., with doors open at 7 p.m.

“A full jazz orchestra comprised of exceptional musicians from across the nation, the Army Blues have performed at such prestigious venues as the Monterey Jazz Festival, the Montreux Jazz Festival, Birdland in New York City, and Blues Alley in Washington, D.C.”

The ensemble’s programs feature a wide sampling of the best jazz can offer, from the traditional dance hits of the big band era to the energized multi-ethnic rhythms of today.

“The Longwood University jazz ensemble will perform an opener for the program. The Army Blues will follow with a full set, including a musical recognition for veterans of the U.S. military services,” according to the release.

“There is no finer jazz orchestra anywhere than the Army Blues.  We’re very excited to have them visit Longwood and hope that many people from the Heart of Virginia can attend.  They offer something fun for everyone,” said Dr. Charles Kinzer, director of the LU Jazz Ensemble.

On a bulletin board in the ARC Quad at Longwood University, students notice layered purple and gold tissue paper, photos... read more