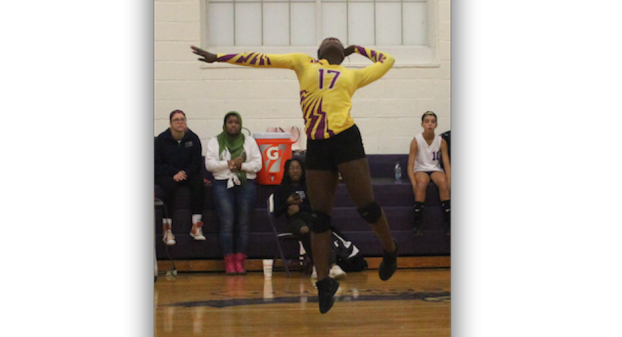 Prince Edward County High School’s varsity girls volleyball team has struggled as of late, but a strong start to the 2017 season has the Lady Eagles sitting where their coach wants them to be — better than .500.

The Lady Eagles had lost their last three matches 3-0, a streak that came about in part due to an injury to one of the team’s six seniors.

This affected Prince Edward in its Tuesday road match against Buckingham County High School, but Lady Eagles Head Coach Rachel Walker said that “my two defensive specialists played amazing (Sarah Edwards and Alia Muhammad), so we were still able to take something positive away.”

The team has enjoyed significant continuity, as only two players from last year’s squad graduated.

“They were all-around players, so it kind of hurt, but we have a lot of girls this year,” Walker said. “We have pretty much the whole team back and then some.”

The roster is composed of six seniors, three juniors and three sophomores.

Walker said Rust is “an all-around, solid player, and she led us in all categories and stats last year. She’ll probably do the same this year.”

Roach also drew praise as an all-around, solid player, and the coach described Edwards as the team’s best defensive specialist.

“I’m looking for more out of Makayla Morris, who’s a sophomore, but she was our only freshman on varsity last year,” Walker said. “And she’s athletic and has time. She’s growing as a player, so I’m expecting a lot more out of her.”

Because of that athleticism, “it’s very easy to coach them and get them to do the things that I want them to do. So there’s no reason why we can’t be over .500 and make a good run in the … playoffs, for sure.”