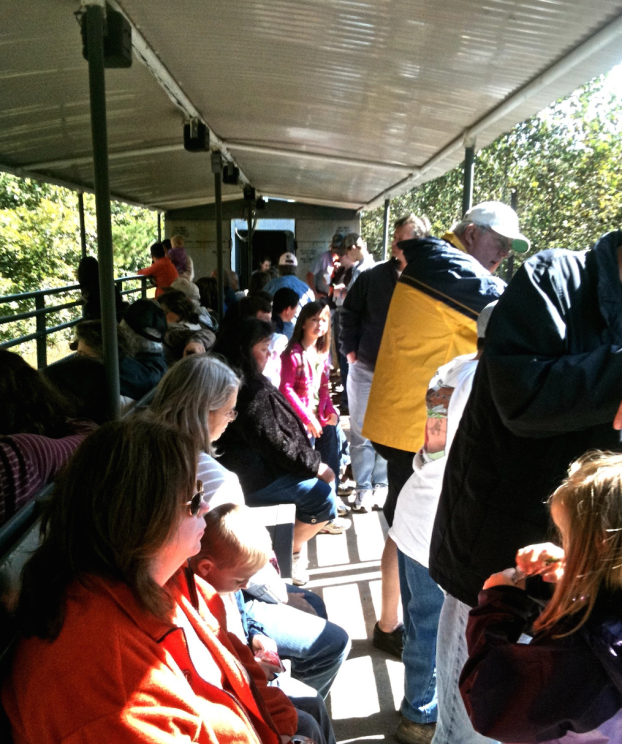 Participants are riding on an open car on the Autumn Leaf Rambler.

“Each day, choose from either the morning or afternoon three-and- a-half-hour round trip for a nostalgic journey through the rolling hills and deep forests of unspoiled autumn landscape in rural Buckingham County,” officials said in a press release. “Enjoy the sights and sounds of the bygone days of passenger travel from your seat in either the vintage reclining seat coaches or the open air sightseeing cars.”

According to the release each trip also features a spectacular view of the James River from a unique perspective.

“This would be an ideal family outing — picnic lunches welcome. Sandwiches, snacks and beverages will also be available on the train,” officials said in the release. “All trips depart from the Buckingham Branch Railroad Station, 1043 Main St. in Dillwyn.”

The release cited fares for the three-and-a-half hour trips are $30 for adults and $18 for children ages 2-12.

According to the release, on each of these trips a special appearance by the cowboys and outlaws of the Tom Mix Rangers will be featured.

“They will entertain you for a bit as we leave Dillwyn then stage a gunfight beside the train later. See the days of the Old West relived,” officials said in the release. “As seating for all of these trips is limited, advance ticket purchase is strongly recommended.”

Tickets may be purchased online at www.odcnrhs.org/excursions.htm or by mail at Richmond Railroad Museum, P.O. Box 3131, Chester, VA 23831.

According to the release, net proceeds of these trips help fund the railroad preservation and museum projects of the Richmond Railroad Museum, a voluntary, nonprofit Virginia educational organization.

The riot in Charlottesville was nothing less than a tragic and disgusting act of violence brought about by hateful rhetoric... read more