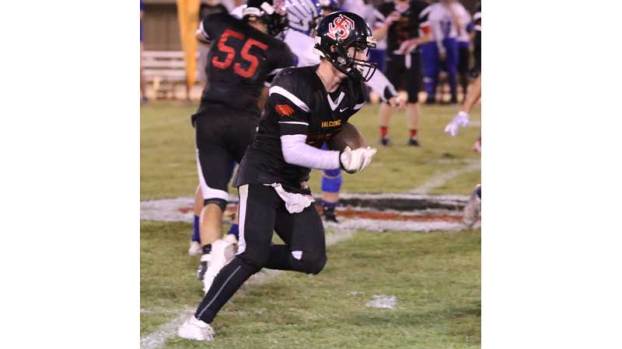 Fuqua School senior running back Ben Bailey runs for some of his 233 yards Friday night during the Falcons’ 38-6 victory. (Photo by Titus Mohler)

Fuqua School’s varsity football team asserted itself early against visiting Atlantic Shores Christian School on Friday and finished the night with a 38-6 victory to improve to 2-1 on the year.

“I think we played well,” Falcons Head Coach Ben Manis said. “We had some things go our way, and our kids kind of took the momentum and ran with it.”

“They kind of also understand the quality of coaching at Atlantic Shores,” Manis said. “(The Seahawks are) a well-coached team, and (our kids) understand what we’ve had to face the past couple years. Shores is probably a little bit (more) down this year than they have been in the past.”

He said he believes that after last season, the Seahawks graduated 14 players, nine of which had college offers, which meant that Atlantic Shores Head Coach Wayne Lance “had a lot of shoes to fill, a lot of big-time roles.”

Manis praised his own players for using to their advantage the experience they have playing against Lance’s teams, and Manis highlighted senior running back Ben Bailey and sophomore quarterback Elijah Warner for their offensive performances.

Bailey carried the ball 13 times for 233 yards and two touchdowns, and he also had a 15-yard touchdown catch.

Warner went 5-for-7 passing for 120 yards and two touchdowns, and he ran nine times for 33 yards and a score.

“Defensively, Cody Howard, he’s starting to really come around,” Manis said of the senior linebacker. “We always kind of knew what Cody could do. It’s his time now. The kid’s incredibly fast. … He makes plays.”

Senior star quarterback/linebacker Billy French, who has been recovering from a stress fracture, saw a little bit of playing time during the game to help keep his ability to run the offense sharp.

Manis indicated he was pleased with the promise shown by some backup underclassmen in action Friday.

“They got a good chance to play a good portion of the game,” he said.

The Falcons visit Hampton Roads Academy on Friday with kick set for 7 p.m.

Knights come back for first win of the year