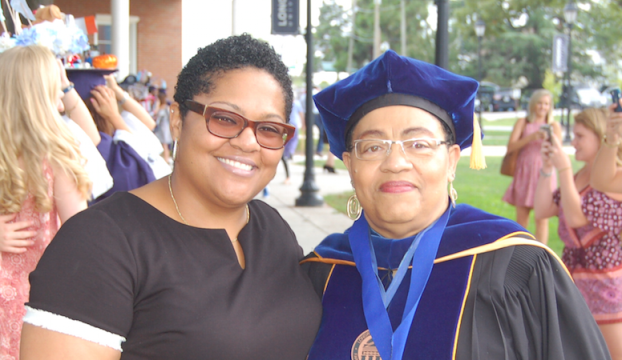 Prince Edward County Commonwealth’s Attorney Megan Clark’s speech during Longwood University’s annual convocation Thursday encouraged students to decide how to contribute to the world around them.

“You are only one person — so am I — but that is all it takes sometimes to affect a great change,” Clark said. “Are you supposed to stay silent because an issue doesn’t affect you personally? No — being a citizen leader requires the opposite of you.”

Convocation signals the official beginning of the academic year and marks the official start of the senior class’ final year on campus, which is traditionally marked by being “capped” with elaborately decorated mortarboards by underclassmen friends, according to a Longwood press release.

Clark said in her speech that while the armed forces weren’t her way of serving the country, she does what she can from where she is so that those in the armed forces aren’t fighting and dying for freedom in vain.

“Unless you’re living under a rock, our country, you know, our country is in a time of great turmoil,” Clark said. “And if we aren’t careful, we’re going to slip back into an era that people fought to keep us out of. Personally, I’m afraid of taking those steps back. I’m afraid that too many basic human rights are being trampled upon. I’m afraid that the concept of equality — because let’s face it, we’ve never really had it — is diminishing.”

Clark said she was afraid that people are allowing their fear to keep them from speaking up about an insurgence of injustice.

“If we better our communities, naturally we’re going to be better as a nation,” Clark said. “… Some people will say, ‘Well, you know, I see all of that going on but that’s not really going to affect me, so I won’t do anything about that.’ And you know what? For some of you it may be true that you’re not going to be affected.”

The Longwood University Department of Music will host a concert by the United States Army Blues, an 18-piece jazz orchestra... read more