The coaching position became open when its longtime occupant, Russ Gowin, stepped aside after having been named athletic director at the school. 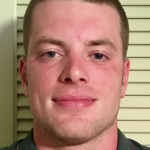 Boyers is a veteran to the Buckingham hardwood both as a player and as a coach, and he described himself as “extremely grateful” for the chance to lead the varsity boys program.

“I’m excited for the opportunity,” he said. “I think growing up in this community and then having some success during my time at BCHS and now being able to give back to the school is a really rewarding feeling for me.”

Playing forward, Boyers logged three years of varsity basketball at Buckingham. The Knights made it to the final four in the state during his sophomore year.

As a junior, he was named the James River District Player of the Year, and he made the all-state first team in 2010, his senior year, when Buckingham finished as state runner-up.

He played in the Virginia High School League All-Star Game in Hampton that summer.

Boyers also played a year of basketball at Bridgewater College.

His first taste of coaching came in a familiar place.

“Buckingham was my first experience,” he said. “As soon as I graduated (from college), I was fortunate enough to get a job for the school system, and I came on as Coach Gowin’s assistant in my first year in 2013.”

He was a physical education (PE) teacher at Buckingham County Primary School in 2013 and is now in his fourth year serving as a health and PE teacher at the high school.

He has been Gowin’s top assistant for the past four seasons.

“He will do great,” Gowin said, noting Boyers had been his choice to replace him as head coach for a while. “It’s great now to hire him firsthand as my

Boyers expressed pleasure in having been able to experience the game of basketball in a variety of key roles, particularly because the sport has been a big part of his life.

“It’s something I’m passionate about and something I’m excited about moving forward,” he said. “Moving on from a player to assistant coach and now being a head coach, it’s an exciting feeling for me.”

He expects the blend of his past experience to serve him well as a head coach.

“I think having that past success as a player and then these past four years as an assistant for Coach Gowin, it’s been a great experience for me,” Boyers said. “I’ve learned a lot. He’s prepared me well for it. I just want to continue to carry on the tradition of Buckingham basketball.”

His official start date was Sept. 13, and he plans to start preseason training next week.