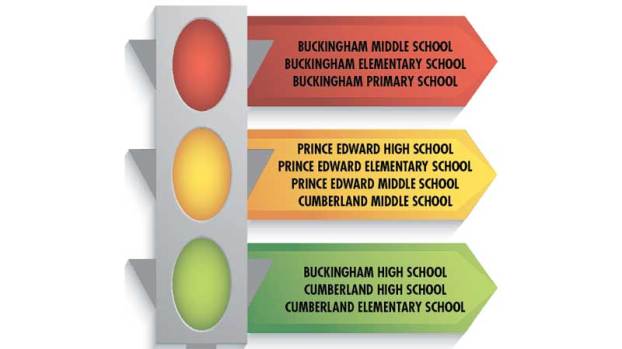 Based on the school accreditation ratings released by the Virginia Department of Education this week, which are based on last year’s Standards of Learning tests scores, schools in green received the status of “Fully Accredited.” Schools in yellow are designated as “To Be Determined” or “Partially Accredited: Warned School-Pass Rate,” while schools in red were “Denied Accreditation.”

Both federal and VDOE ratings are primarily based on Standards of Learning (SOL) tests administered in the 2016-17 school year.

“For a school to earn full accreditation, students must achieve adjusted pass rates of at least 75 percent in English and at least 70 percent on assessments in mathematics, science and history,” VDOE officials said in a press release. “High schools must also meet a benchmark for graduation and completion. Accreditation ratings may also reflect an average of achievement over several years.”

Division Superintendent Dr. Cecil Snead said the division has been working hard on readjusting its reading approach since May 19 when testing data started returning at the elementary school level.

“Teachers attended rigorous workshops during the summer months to enhance their craft,” Snead said. “While we also need to continue focus on reading at the middle school, we are more strategically focusing on writing to help with the all student pass rate in English.”

Snead said the division was fortunate that they are only short of the all student pass rate benchmark in one area. He noted while the primary school does not administer SOL tests, it receives the same rating as the elementary school.

“This is unfortunate because we get two denied accreditation statuses instead of one, (rather than) if we housed (grades) K-5 in one … school,” Snead said.

Snead said he was meeting Wednesday with the school board to demonstrate that the division’s successes far exceed its challenges with regard to state assessments even though the accreditation labels don’t imply such.

BCES and BCPS were previously denied accreditation in November based on the previous year’s test scores while BCHS received the status of “Fully Accredited,” and BCMS was cited as “Partially Accredited: Warned School-Pass Rate.”

“We are pleased that both CCES and CCHS are ‘Fully Accredited’ by VDOE standards and have met all federal benchmarks,” said Division Superintendent Dr. Amy Griffin. “We are particularly excited with the significant academic gains made over the past two years at the elementary school partly due to implementing a balanced literacy approach, aligning instruction and increasing student engagement.”

Griffin said the division is cautiously optimistic that CCMS will be deemed “Partially Accredited: Reconstituted.”

“This overall academic improvement reflects the hard work of all our stakeholders, including students, faculty, staff, parents and our supportive community members,” Griffin said.

Last year, CCES and CCMS were rated as “Partially Accredited: Reconstituted,” and CCHS was listed as “Fully Accredited” in November based on the previous year’s test scores.

PECHS did not meet the state required mathematics benchmark.

According to the VDOE release, the status of 92 schools in the state at risk of being denied accreditation will be determined by the state board of education later this year.

“Under Virginia’s current accountability regulations, a school that has not earned full accreditation for three consecutive years — and fails to meet state standards for a fourth consecutive year — can apply for a rating of Partially Accredited: Reconstituted School if the local school board agrees to reconstitute the school’s leadership, staff, governance or student population,” VDOE officials said in the release. “A reconstituted school can retain this rating for up to three years if it is making acceptable progress.”

The release cited PECMS is a focus school and BCPS and BCES are priority schools as designated by federal benchmarks.

“Focus schools must employ state-approved, school-improvement coaches,” officials said in the VDOE release. “Focus schools retain their designation for a minimum of two years unless they no longer receive federal Title I funding.”

The release cited that priority schools must design and implement school-reform models that meet state and federal requirements.

Priority schools are identified as the lowest achieving five percent of Title I schools based on the performance of all students in reading and/or mathematics on federal annual measurable objectives.

By a unanimous vote Tuesday, members of the Prince Edward County Board of Supervisors amended a fence ordinance applying to... read more