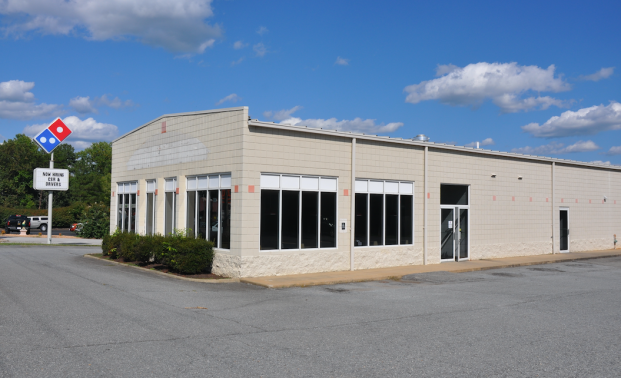 Domino’s, currently located on South Main Street, is set to move to MidTown Square Shopping Center, according to town officials. Other restaurants have announced their plans to open between now and 2018. (Photo by Jordan Miles)

A renaissance of new restaurants is making its presence known in Farmville as more eateries make their way to town.

According to the Town of Farmville, Little Caesars, Hardee’s and a soon-to-be relocated Domino’s anticipate opening their doors to the public soon.

“Domino’s is opening up in the MidTown (Square) Shopping Center,” said town spokeswoman Kate Pickett Eggleston, noting the restaurant was set to open in mid-September.

Eggleston said the restaurant could open in the fall.

“Hardee’s is supposed to be opening in early 2018 in front of Tractor Supply Co.,” she said. The site is located at the intersection of South Main Street and Milnwood Road.

“They’re not very far along in the process,” Eggleston noted regarding Hardee’s.

The two new restaurants and third anticipated relocation are among many other restaurant announcements in town.

“All of these new restaurants opening up in town are going to be great opportunities for the community to come together,” Eggleston said. “They’re going to be a great addition to our local economy, and they will help to attract new visitors to our town who are in surrounding areas and also to help visitors who are here exploring to have more things to do and more places to visit.”

The newest announcement comes from “119,” where Bill McKay and Maureen Walls-McKay are working to blend new flavors with repurposed materials in downtown Farmville in opening a restaurant at 119A N. Main St. that promises tacos and more.

The restaurant is set to open this fall in the space of the former Clark’s Pharmacy.

In July, Pizza World, a gourmet pizza restaurant, announced it would open in the location of the former Quiznos in the Sunchase Farmville Shoppes at 237 Sunchase Blvd.

In a previous interview, the restaurant’s manager, Lynn Ballance, said the establishment would hire approximately 15-20 people.

According to Danny Teachey — who owns the restaurant with his wife, Avery — the restaurant, Pizza World, is part of a small chain that was started in the Midwest that focuses on gourmet pizzas.

Though its originally projected opening date of Aug. 1 has come and gone, the new owners of Huddle House, located on South Main Street in Farmville across from Walmart, remain steadfast in opening the doors to the restaurant soon.

According to Stephanie Taylor Blake, a spokeswoman for the new owners, “they’re anticipating remodel construction to begin in September after Labor Day, however, this may change.”

Months ago, brothers Dev and Shiv Patel announced the intentions to open Huddle House — bringing with it 40 new jobs to the community.

The Hotel Weyanoke’s renovation and restoration project in Farmville — one that’s slated to create 76 new jobs and spur more than $7 million for the economy of the town — once complete, is set to feature four unique food and beverage venues including: Sassafras, a bakery and market; Humble Pie, an artisanal pizza grill and market featuring locally-sourced organic ingredients and family recipes; Campagna, an Italian trattoria and tasting room; and The Bridge, a rooftop refreshment retreat.

Food taxes bring in a large amount of revenue for the town.

“I’m hoping what it will do, instead of people going out of town for certain venues, that we offer more of a variety for people to stay in this area,” said Town Manager Gerald Spates, “so I think the big thing, how much it’s going to increase (revenue for) those individual places, I guess depends on how many people are going to eat there from the surrounding county and from in town that would normally have gone out of town for the same thing.”

Spates said in speaking with existing restaurant operators and owners, “they welcome the competition.”

“A lot of them feel that it helps them,” Spates said.