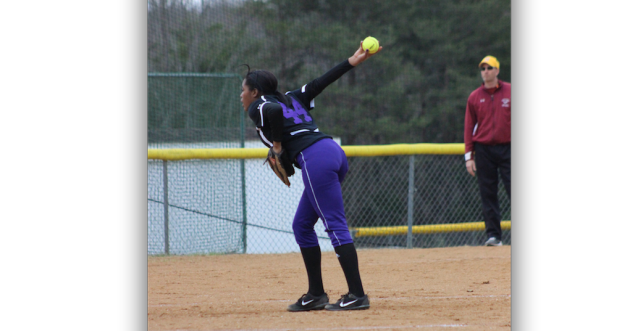 Prince Edward County High School freshman Saroya Walton made the All-Quad Rivers Conference 34 team after showing impressive growth as a batter and and an outfielder (picture by PECHS Yearbook Staff).

The Lady Eagles were young, but it was also their youth that helped show they can have a strong future. Freshman center fielder Saroya Walton was named to the All-Quad Rivers Conference 34 team.

“I felt like throughout the season, we made progress as far as playing together more as a team,” said Prince Edward Head Coach LaDonia Mujahid.

But she noted there were both progressions and regressions for the Lady Eagles, who finished with a 4-17 record.

Though the year ended with a loss to Goochland High School  in the first round of the conference tournament, Prince Edward actually created a season highlight in that contest.

“Goochland was, like, 12-0 in conference; there was a reason why they were 12-0,” Mujahid said. Nevertheless, in the first-round game, “… they didn’t score until the fourth inning, so that was progress.”

The coach said the high point of the season to her was her team starting to understand the concept of finishing games regardless of the setbacks that may come about to make losing seem likely.

“You have to start understanding that, well, once you’re down by two runs, that’s not the end of the game,” Mujahid said. “That just means you’ve got to dig a little bit deeper.”

She described the low point of the season as being embodied by her team’s confidence level, which she said needs to be elevated moving forward and hopefully has already begun to change.

“Having confidence goes a long ways, and that’s just not with softball,” she said. “That’s just with everyday life.”

Helping provide a confidence boost was the play of Saroya Walton and the recognition she received as a result of it.

Of Walton’s accolade, Mujahid said, “I think it was (deserved) because I felt like she worked hard.”

Batting second in the lineup, Walton learned how to bunt and recorded 16 hits on the year, all but one of them coming via a bunt.

She had a .308 batting average, registered 11 runs scored, nine stolen bases and committed only four errors in the outfield.