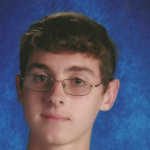 Jefferson Wise, a recent graduate of Buckingham County High School is the recipient of the Harriett Pittard Beales Scholarship at William & Mary for the academic year 2017-18.

According to a press release, recipients are chosen based on academic performance, extracurricular community activities and service, outstanding character and other personal achievements.

Students from several areas, including Buckingham, Cumberland and Prince Edward, are considered for the award once they have been admitted to William & Mary.

Honor graduates from Buckingham County High School’s Class of 2017 pose for a photo before their graduation ceremony May 12.... read more