‘This is my community, my home’

“This is my community, my home,” Dr. Anthony Muñoz said when asked following his retirement if he would he move back to his native country, Spain. Waving a hand toward his front yard and the town of Farmville beyond, he added, “These are my people I came to help.” 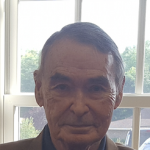 In 1961, Dr. Muñoz traveled to this community from MCV in Richmond — and before that from New York City, Paris, France, and Valencia, Spain. At the time he didn’t know if he would stay, but after 56 years he’s made up his mind.

A handsome man nearly 90 years of age, he is still an asset to the community and very much a man who speaks his mind.

His candor and openness are inspired by his father, a banker who expressed disagreement with Spain’s dictatorial rulers in public.

“When I was a boy, about 8 years old, soldiers would come to our door every few months,” explained Dr. Muñoz. “They would question him about his activities. Finally, he told them to make an arrest or stop coming here.”

Dr. Muñoz’s experiences in Spain are a big part of why he says America is the “greatest country on earth.” He knows what it’s like to live in a repressive society.

As a boy in school, he and his fellow students were required to sing patriotic songs and to attend church ahead of their classes. He remembers four days of book burning in his hometown of Valencia, the last city to resist Fransisco Franco, who was dictator of the country from 1936 to 1975.

Still, because of his outstanding performance, he won a scholarship to study surgery with famous doctors in Paris. Once there he could think of going to other countries. When four friends urged him to come to the U.S., he said his English consisted of “yes” and “no.” He must have said “yes,” because he traveled with them to New York, was hired as a surgeon and learned English.

Life under Franco is why Dr. Muñoz places so much importance on education and the freedom of expression in this country. “There are four languages in Spain. My native language is not Castillian, the official one.” He explained that when Franco insisted on a single language, he robbed many of their identity. Dr. Muñoz’s views of education were contradicted by the closing of the schools here, which he recalls with sadness.

When Farmville needed a surgeon in 1961, Dr. Muñoz had to take a stand on education and other issues.

“There will not be two waiting rooms in my office,” he insisted, though that was the case with some some other physicians.

He also said the hospital would not be able to divide his patients by race. Why he took this stand was simple to him: “I have convictions,” he said.

In Spain under Franco people had to be careful to follow the rules.

“There were loudspeakers in the streets,” he explained. “And when they played the national anthem, everyone had to stop, salute and listen.”

He saw one man fail to do so, perhaps because he was old and couldn’t hear. The police beat him so badly that he had to be taken to the hospital.

In this country, he says, freedom of speech is vital. When he opposed segregated waiting rooms, at first, he says, “I was called an ‘SOB.’ Then I became ‘controversial.’ Finally I was ‘accepted.’” His acceptance was more than affirmed when the Virginia House of Delegates passed a resolution acknowledging his contributions to the area, citing his “unselfish service in treating residents,” according to The Farmville Herald.

In addition to his practice, Dr. Muñoz had taught at medical universities and visited schools to talk about his practice and his life. “One of the things close to my heart is teaching,” he says. He never needed the honors he received — and there are many; he wanted to help people. Thousands of patients and families in Virginia have benefited.

Dr. Michael Lund can be reached at lundmc@longwood.edu.