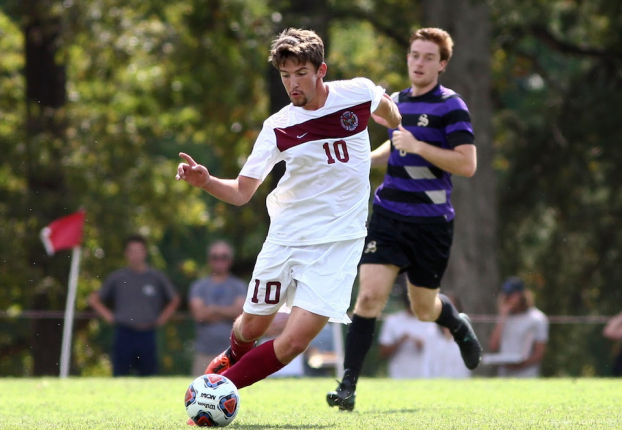 ‘There’s a lot of potential’

Hampden-Sydney College’s (H-SC) soccer team will enter the fall season with a familiar roster and new coach who is optimistic about what the Tigers can do in the challenging Old Dominion Athletic Conference (ODAC).

Tommy DiNuzzo was annouced as H-SC’s new head soccer coach Feb. 21, and he was able to work with the Tigers in the spring.

Since then, he said players have been given workout plans to follow during the summer, and he will see them for the first time this fall on Wednesday.

“And then we’ll be training a few times a day after that,” he said.

Based on what he has seen already, though, he said, “I think there’s a lot of potential. The ODAC conference for men’s soccer is very unforgiving, so hopefully the guys come in fit and ready to go for preseason. That’s going to be very, very important. And then from there, I think we can be very competitive within the conference and play with everybody. And then from there, hopefully we can get some results and make the playoffs, and then anything can happen.”

“I am very well-versed in the ODAC just because when I was at Mary Wash, we played a ton of ODAC teams every year, and then I coached at Lynchburg, and the same kind of the thing — we were in the conference, so I know what it’s about, and again, it’s a very, very difficult conference because there’s no easy games.”

He noted that the teams in the ODAC are similar in many ways, so games can simply come down to who wants it more and who responds best in times of difficulty.

Hampden-Sydney went 6-9-1 during the 2016 season. It lost five players due to graduation but returns most of its players.

The Tigers’ 2017 spring roster is populated by 16 sophomores, eight seniors and three juniors.

“That roster will change a little bit after preseason, but yeah, that’s about right,” DiNuzzo said.

Having arrived in late winter, he had some ability to shape the roster through recruitment.

“At that time there were a couple kids that had decided to come here already, and then from there, we worked really hard to kind of round out the class,” he said. “So we have, at the minimum, seven incoming guys right now, and then we have a couple others that will be here to try out, so that number could grow a little bit.”

The performances of players this fall will give DiNuzzo a better idea of who the squad will be able to count on in the difficult times of a season, but he has gotten at least some sense of who could be team leaders based on contributions in the spring.

“We do have a leadership council in place, and we have some seniors that stepped up in the spring — Thomas Carswell being one, Landon Moss being one and some others as well and a couple other younger guys that were elected to our leadership council too that I think should have a strong voice,” DiNuzzo said.

The coach added that what defines a team in a difficult conference like the ODAC are the players that are dependable in the rough moments.

“I think we have a lot of guys that when they’re put in that situation will hopefully kind of rise to the challenge and stand up and be counted, basically,” DiNuzzo said.

Russ Gowin has been named athletic director at Buckingham County High School (BCHS), following in the footsteps of his father... read more