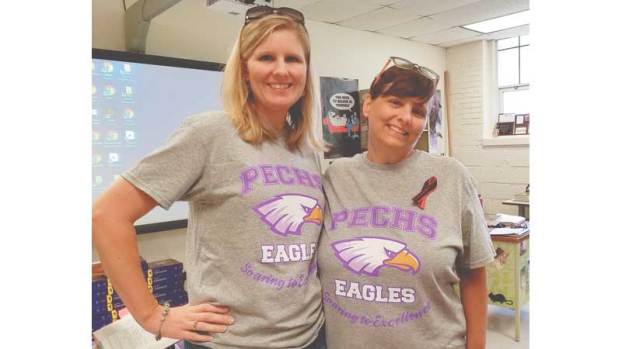 Teachers and staff are raising money at Prince Edward County High School (PECHS) for causes near and dear to the community by paying $1 to wear a school spirit T-shirt and jeans on Fridays.

According to school spokeswoman Jennifer Kinne, donations for the first month of “Faculty Fridays” are being given to the family of Brianna Giuriceo, a 2017 PECHS graduate who died in a crash Aug. 17.

Kinne said organizations slated to receive funds from “Faculty Fridays” include the FACES Food Pantry and the Farmville Area Habitat for Humanity.

“When we were beginning the new school year, we really wanted to demonstrate to the students how to make a positive impact and the sense of servant leadership,” Kinne said. “Hosting a fundraiser with the staff each week was a great way for us to role model this behavior.”

According to Mary Jane Cook, an English teacher at the high school, the effort to support local causes was organized by Katherine Cole, her fellow English teacher.

Cook said Cole wanted students to understand the importance of giving to charitable organizations, how the donations impact organizations and how the money is used.

Cook said the donations allow the community know that the school is involved and showing students how to do the same.

“And (it continues) creating a partnership between the Farmville (and the) Prince Edward community with (PECPS),” Cook said.

“I really like the idea of donating to good causes, especially (the FACES Food Pantry) and the American Cancer Society,” said PECHS teacher Kacey Parker. “That’s a nice change.”

Parker said educators were able to make any size donation they wanted.

“Last year there (weren’t) really a lot of people participating, so I think the fact that it’s going to a good cause has made pretty much everyone that I’ve seen contribute,” Parker said.