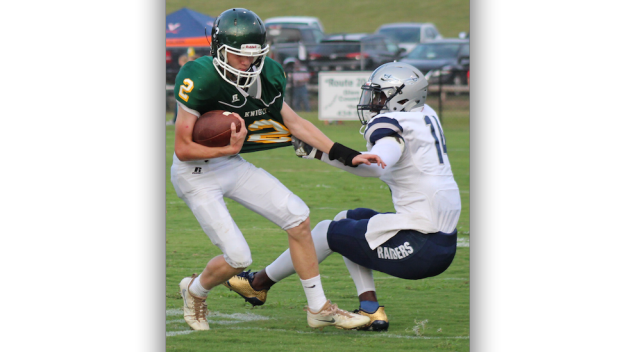 Appomattox County High School’s varsity football team has not lost a game in two years, and it brought its strength — particularly in numbers — to Buckingham County High School on Friday night and left with a 63-14 victory.

Knights Head Coach Josh Wallace took positives and negatives away from the loss and indicated his team is at a fork in the road.

“I think it’s hopefully — and I told the guys this after the game — it’s one of those things where they can decide what kind of season they can have now,” he said. “They can either decide to get better, or they can pack it up and make a mockery of the season. So I think all the coaches saw some good things. We told them that. And we saw a lot of things we need to work on. It’s hard when we don’t have a lot of depth. Appomattox has a lot of depth, and that’s what happens when you start winning. A lot of people want to play.”

The Raiders were able to bring in fresh legs quite often, while Buckingham players often had to play offense, defense and special teams.

Despite the odds, the Knights put points on the board, as freshman Gerry Toney scored on an approximately 35-yard run in the first quarter, and he also threw an approximately 12-yard touchdown pass to junior Tyrese Ayres in the second quarter.