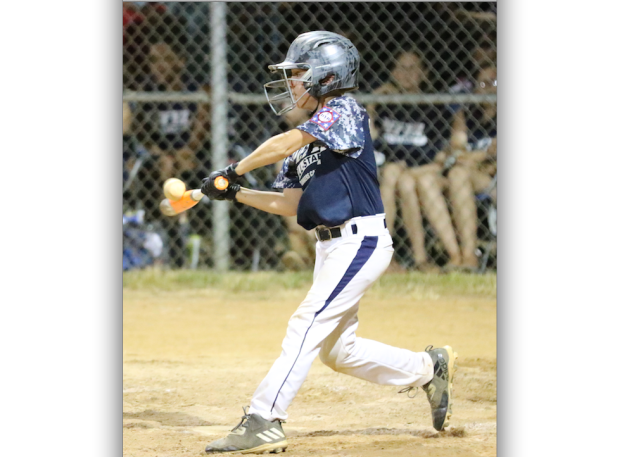 Sawyer Furlong and the PEFYA Minors All-Stars team are headed to the 2017 Dixie Youth Baseball AAA Minor League World Series in Alabama after winning the Virginia state championship July 26. Furlong was recognized as having the top batting average of any player competing in the state tournament — .588 (photo by Titus Mohler).

PEFYA Minors Manager Jerry Morgan said he told his team during the final day of the tourney, “If you never give up, we’ll win this thing.”

To clinch the state title, the PEFYA Minors defeated the Appomattox All-Star team 11-10 on July 26 in Appomattox.

It was the second half of a doubleheader, the first half of which put Prince Edward-Farmville in a rematch with the only team that has defeated it this summer — the Montgomery All-Star squad. Making their Monday loss a distant memory, the PEFYA Minors eliminated Montgomery with a decisive 13-6 victory.

Set to represent Virginia at the World Series, the PEFYA Minors have been working to raise funds to cover trip expenses. Once in Alabama, they are slated to play Arkansas on Saturday at 6:45 p.m. EST. Win or lose, Prince Edward-Farmville will play again the next day in the double-elimination event.

In the state title game, the PEFYA Minors took a 2-1 lead after the first inning and were up 9-2 after the second. Appomattox rallied to get right back in the game, but PEFYA’s defense successfully held off the host team in the sixth and final inning.

Morgan said that after his team got Appomattox’s first three batters out, “I just jumped up and down for joy.”

Key contributors to the state title game win included Harold Landis, who hit a two-run home run, and Clevante Watkins, who was the only one to hit every time he was at bat, going 3-for-3. Watkins and Noah Boehmer each hit a double.

Sawyer Furlong was formally recognized as the top batter of the tournament with a batting average of .588.

Jack Jones had a triple and also earned special recognition from his PEFYA teammates for catching five deep fly balls in center field.

The PEFYA Minors will be accepting donations Wednesday from 11 a.m.-3 p.m. at Walmart on Peery Drive in Farmville, and they have a fundraiser set for later the same day from 5-7 p.m. at Buffalo Wild Wings on South Main Street in Farmville. The restaurant has agreed to donate to the team 10 percent of its food sales during that time.