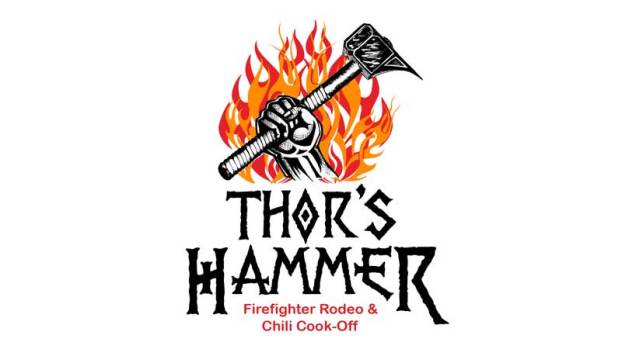 The inaugural Thor’s Hammer Firefighter Rodeo and Chili Cook-Off, set for Sept. 30 at The BARN on U.S. Route 60 near Buckingham Court House — has a dual purpose for Cassandra Stish, who’s led the effort to organize the event.

While celebrating her late son’s memory and his service to the community as a volunteer firefighter, the event’s purpose is to raise awareness of the long hours and hard work fire department members log in Buckingham County and across the state and to raise funds for the four fire departments in the county.

Thurston “Thor” Stish, the oldest son of Cassandra and George Stish, a well-known 19-year-old volunteer firefighter, VDOT employee, hunter and beloved friend to many, died in a single-vehicle accident New Year’s Eve in 2015.

The Buckingham man was killed when he crashed his truck on Woodland Church Road in Yogaville — only a few miles from his home.

According to a press release from Stish on behalf of Thor’s Hammer, a nonprofit organization, following Thor’s death, “hundreds of people donated more than $3,000 to the Buckingham County Volunteer Fire departments in his honor. Last year, his family and friends started thinking about how to continue to honor his memory in a way as big and bold as he was.”

“In the days and weeks that followed Thor’s passing, people donated to a general fund … And it came up right about $3,800, and George and I were faced with the decision of like, ‘Well, we could divvy this up and give everybody $1,000 and roll on and say here’s a gift, knowing full well that that wouldn’t even cover … a helmet and a pair of boots,’” Cassandra said in an interview.

That’s when she and her husband sought to “establish something that has a lasting effect, to turn the $3,800 into tens of thousands of dollars that we could do annually and we could really do something big, like building camaraderie among the departments, helping to show that these departments need new volunteers and what does that mean, some of the things that volunteer firefighters do. …”

Thor’s Hammer, Cassandra said, will serve as an “opportunity for the community to see a need and to see the equipment and to see some of the guys.”

“We combined many of Thor’s favorite things into this event: firefighting, chili, music and
competition,” Cassandra said in a press release. “Our aim is to create a fun and engaging opportunity for the (volunteer fire departments) to raise awareness, recruit new members (and) win prizes and cash.”

The event, which will offer family fun to the community, will include competitions among fire departments across Virginia.

According to Cassandra, the winner of the firefighter’s competition will earn a cash prize along with the coveted Thor’s Hammer trophy, “which they keep for the year until it’s up for grabs in next year’s competition.”

Ticket sales from the event, she said, will be split among Buckingham’s four volunteer fire departments.

“The rodeo gives the volunteer fire departments that serve Buckingham County citizens a
chance to show off their skills through a series of related challenges: door breach, zero to hero and hose roll and relay. Along with bragging rights, the winning house will win a cash
prize and get to take home the 40-inch tall, specially crafted Thor’s Hammer trophy … if they can lift it.”

Other activities, according to the release, will include a bounce house, obstacle course, snow cones and cotton candy, “all generously donated by Awesome Party Supplies, of Farmville. A full set of firefighter gear and a fire engine will be on site for kids to touch and explore in hopes of inspiring future volunteers.”

“The event itself is pretty much all paid for,” Cassandra said. “The ticket sales are what we’re going to divvy up among the (Buckingham) departments that compete.”

She said the winners of the planned chili cook-off will get bragging rights. “I’m hoping it’s going to be a good time that brings people together in memory of Thor but also for a greater purpose. …”

Tickets for the event are available at the door and can be purchased in advance at www.eventbrite.com.

The event will also include a firetruck row, a cake walk, adult beverages, cotton candy and T-shirts for sale, along with sign-ups for Thor’s Club, an initiative spearheaded by Thor’s brothers to encourage driving smart, safe and sober, according to the release.

“Most people don’t realize that a single set of turnout gear to outfit one fireman costs nearly $12,000 from boots to helmet,” Cassandra said. “For small rural departments, this is a staggering cost, but it’s light compared to the cost of the trucks themselves, which easily top(s) $500,000.”

Students at Cumberland County Elementary School (CCES) will receive free lunches this school year without having to fill out any... read more