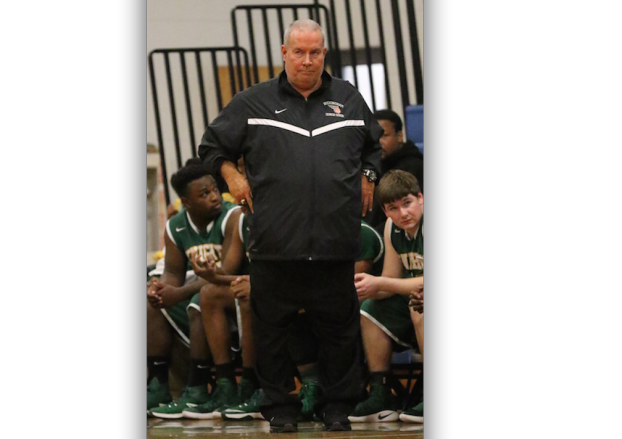 Russ Gowin, who has long patrolled the sidelines as the Buckingham varsity boys basketball head coach, has transitioned to become the school’s athletic director (photo by Titus Mohler).

Russ Gowin has been named athletic director at Buckingham County High School (BCHS), following in the footsteps of his father Pete Gowin, who served in the role from 1972-2002.

Gowin said, “I’m excited about the challenge and look forward to working with everybody to try to continue to improve the athletic(s) department.”

“I was interested in the job because the job is something I’ve always wanted to do,” he said. “… As I’ve gotten older, I’m looking forward to moving over to the administrative side of sports.”

“We are pleased that Coach Russ Gowin will have the opportunity to be the new athletic director for Buckingham County Public Schools,” Snead said. “He brings a history of athletics dating back to his high school days and his college years.”

The superintendent noted that Gowin has been an athlete and a coach at both the high school and college levels and also had a stint as athletic director at Bristol College.

“We believe his multi-faceted experiences at these levels will bring many different perspectives that can be beneficial to our student-athletes,” Snead said. “He’s lived in Buckingham his entire life which should position him well to be instrumental in developing authentic local relationships with the community — relationships that can build trust, thus enhancing the opportunity for our kids. Enhancing opportunity for our kids is the No. 1 priority.”

Gowin made clear that having an open-door policy with the community was one of his major priorities.

“I’m really looking forward to working with the community and listening to their ideas and things that we need to do and kind of incorporate that in some of the things we try to do,” he said.

He has almost 20 years of coaching experience, guiding both boys and girls in multiple sports. His most significant coaching contributions came in the sport of basketball, accumulating almost 300 victories.

At the high school varsity level, he has served as a head coach in basketball and football, and he has also been an assistant coach in baseball.

As a result of taking the athletic director position, Gowin will not be returning as varsity boys basketball head coach, though he said he will miss the role.

“Like I say, coaching is a young man’s game, and we’ve got some good, young coaches coming along that are doing a great job, and I look forward to trying to help them be successful and kids to be successful here at Buckingham,” he said.

One of his first duties in his new position will be to fill his old coaching spot, and he said the announcement of a replacement will possibly come during the September school board meeting.

In addition to hiring coaches and scheduling athletic events, Gowin’s responsibilities as athletic director include overseeing all home events and traveling with teams when he’s available and it does not conflict with a home event.

He noted the athletics department will work hard for all its young student-athletes to help them be successful in the classroom, on the field or court and in the community as citizens.

“We’re going to work hard at that and try to be the best we can at that,” Gowin said. “We know kids will be kids, but we want them to learn responsibility and be good role models for our younger kids in the lower grades.”

He said his vision for Buckingham’s athletics department is that it will have strong programs in all sports — not just one or two.

“And our boys and girls program, both are just as important as the other, and we’re going to emphasize that and try to keep our kids in good uniforms and good playing equipment and just be fair to everyone and continue to try to build, and it’ll take time,” he said. “It’s not something that happens overnight, but working together with our community and our kids, we think we can go forward in a positive direction, and I look forward to the challenge.”

Things are going according to plan for the U.S. national team at the 2017 Women’s Rugby World Cup in Ireland.... read more