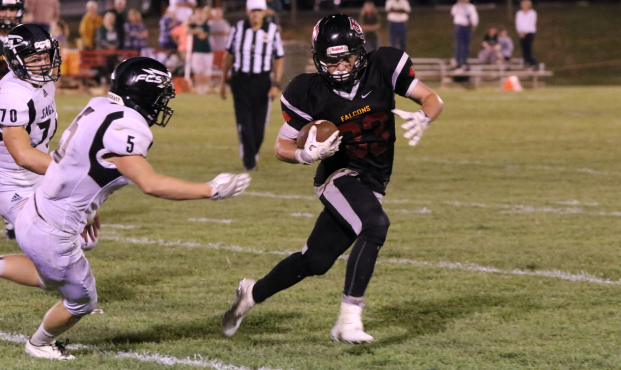 The Fuqua School varsity football team was within striking distance of the lead at times during its season-opening contest Friday night against visiting Fredericksburg Christian School, but the Eagles pulled away to defeat the Falcons 33-19.

“We’ve got a bunch of stuff to fix,” Fuqua Head Coach Ben Manis said, alluding to a variety of miscues in different phases of the game. “… It was just a night that nothing could go right for us.”

The Eagles took a 6-0 lead in the first quarter and made it 13-0 in the second quarter after a long interception return for a touchdown.

Later in the second, Falcons senior Ben Bailey ran for a 19-yard touchdown to help make it 13-7, but Fredericksburg Christian scored again before halftime to claim a 20-7 lead.

Sophomore Elijah Warner ended up getting more reps at quarterback due to the absence of senior Billy French who was sidelined with a preseason stress fracture in his foot that will keep him out from two to four weeks.

“He’s a big-time, key player,” Manis said of French, noting he can play a variety of offensive positions, any position on defense and he’s key to special teams as well.

Though shouldering more of the load than intended, Warner showed promise, going 10-for-18 passing for 103 yards, two touchdowns and an interception.

His four-yard touchdown pass to senior Tyler Thomas made the score 20-13 late in the third quarter.

The Eagles responded quickly, though, as junior Aaron Johnson ran for a 65-yard touchdown to help make the score 27-13.

“We did kind of let that one player really beat us,” Manis said of Johnson. “That kid’s a heck of an athlete.”

Fredericksburg Christian scored again with 3:55 left in the fourth to go up 33-13.

Though only 1:19 remained, Fuqua closed the gap when Warner hit Bailey on a short swing pass for a touchdown to make the score 33-19.

Thomas led the team in receiving with five catches for 81 yards and a score.

Manis said it will be interesting to see how his team responds.

“I think we’re definitely better than we showed tonight,” he said.