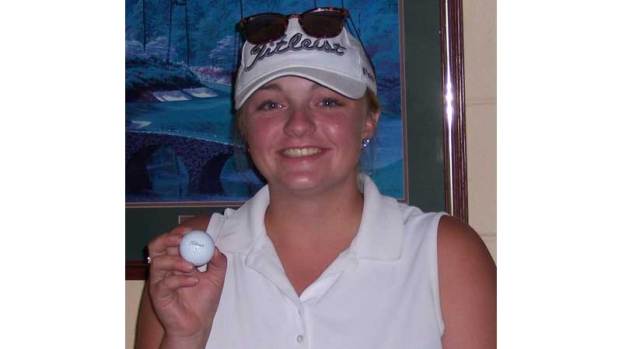 Emily Erickson holds up the golf ball that she hit for a hole-in-one on No. 2 at Amelia Golf & Country Club on Thursday during the Piedmont Junior Championship golf tournament. She won the girls 14-17 division.

Emily Erickson, of Prince Edward, established a tradition of success this summer in Piedmont Virginia State Golf Association (VSGA) Junior Golf tournaments, and she capped off this series of competitions by winning the girls 14- to 17-year-old division of the Piedmont Junior Championship on July 27 at Amelia Golf & Country Club.

“I felt really good about my performance,” she said Wednesday. “I felt like I was hitting the ball really well that day, and everything just clicked.”

The 15-year-old Erickson shot a one-under-par 71, and she was the only golfer at the event — female or male — to produce an 18-hole score that was under par.

“I was hitting my irons really well,” she said. “I was getting it close to the pin. I made the putts. I had a lot of par putts, and I had some birdie putts that I needed to make, and I did, and just pars and birdies were the main thing of the day.”

The highlight of the strong round came on No. 2 where at 124 yards using an 8-iron she hit a hole-in-one, the second one she has ever hit.

“It meant so much,” she said of the ace. “It’s like a dream come true to get a hole-in-one, but to get one during a tournament made it even better.”

Erickson said that after the ace, she probably added three or four birdies throughout the rest of the round.

“This is definitely my best performance at Amelia,” she said.

She estimated that she played in five Piedmont VSGA Junior Golf tournaments this summer, winning her division in the Farmville event and in the Crewe event.

Erickson began playing golf when she was 7 years old, and she has been playing competitively since that time as well.

The story of how she got into the sport is a bit different from the one many golfers have, as no one in particular actively encouraged her to pick it up.

“It was actually out of my own interest,” she said. “One of my dad’s friends took me to the driving range one day just to watch him hit some golf balls, and I fell in love with it.”

She plays for Fuqua School’s coed golf team, which has its regular season in the spring.

“But throughout the year, I play in college prep tournaments and VSGA tournaments all around the state,” Erickson said.