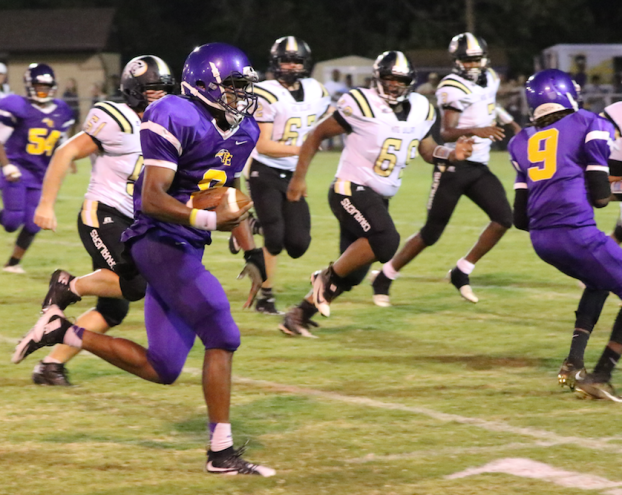 Eagles fly past Cavs in shootout

The 2017 Prince Edward County High School’s varsity football team proved right away that it has resilience, overcoming a 17-point deficit and a 46-point effort from visiting King William High School on Friday to win its season opener 52-46.

“I was pleased with the effort,” Eagles Head Coach James Ford said of his team’s performance. “The guys never gave up. We were down at halftime two scores, and they showed tremendous heart. That was the big thing was the heart we showed. A couple years ago, we’d lose that game, and we’re 0-1, so I’m just proud of the guys.”

The win required clutch play in the final minutes from Prince Edward.

With the game tied 46-46 and little more than a minute left in the fourth quarter, Eagles senior Zion Lewis threw a 33-yard touchdown pass to senior Khalil Smith.

The Cavaliers got the ball back with just under a minute to play, but Prince Edward’s defense held them off to secure the victory.

Both teams found the end zone early and often in the first quarter.

Then momentum swung in King William’s favor as it produced three straight touchdowns, each with a successful two-point conversion. Two of the scores came in the first quarter, making it 30-21, and the third touchdown made it 38-21 in the second.

The second of the consecutive touchdowns was made possible after the Cavaliers were ruled to have recovered an onside kick, a call that Ford said did not appear to be at all accurate after consulting the game film.

Helping to re-energize his team before the half, Lewis grabbed an interception and returned it 29 yards for a touchdown to make the score 38-27 at the break.

“We had a whole ballgame literally in a half,” Ford said.

The Eagles’ defense helped to change the complexion of the game in the second half.

“Our defense gave up two touchdowns from the second quarter on,” Ford said.

Prince Edward outscored King William 19-0 in the third quarter, scoring on four- and 26-yard runs by Marshall and a 62-yard run by Dupuy.

The Cavaliers finally responded, scoring on a three-yard touchdown run and a two-point conversion to tie the game in the fourth, but Smith’s reception from Lewis proved to be the deciding score.

“We wore ‘em out, we wore them down,” Ford said pointing to the key to victory. “We continued to play hard. … We had guys going down, they were cramping and things of that nature, and we had to have some young guys in — some guys, like I said, that are coming straight from the middle school team that are freshmen — and they all stepped in, and they played well.”

For the game, Marshall led the Eagles with 143 rushing yards and three touchdowns on 11 carries. Dupuy carried the ball seven times for 132 yards and two scores and Lewis had five carries for 27 yards.

Lewis was 7-for-11 passing for 66 yards with one touchdown and one interception.

On defense, junior Tajh White led the way with 15 total tackles, including 11 solo tackles. He recorded one sack, one forced fumble and one fumble recovery.