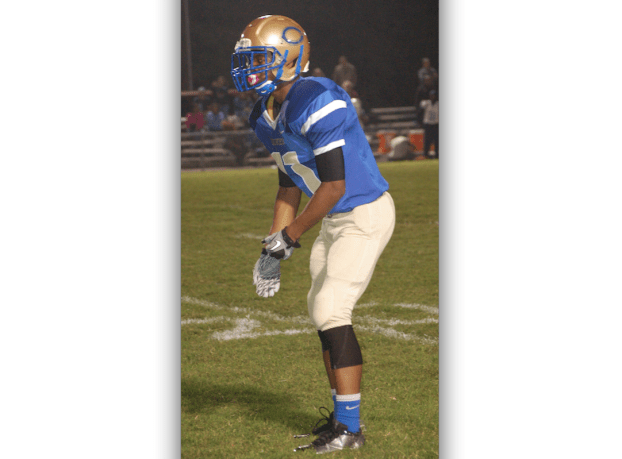 Cumberland County High School’s Keyshawn Diming will provide leadership for the Dukes in his senior season (photo by Titus Mohler) .

Dukes’ participation is up

The preseason has held multiple reasons for optimism about both the short-term and long-term prospects of the Cumberland County High School varsity football team.

“I feel pretty good about where we are right now,” Dukes Head Coach Edgar Knapp said. “I’m cautiously optimistic. Our numbers are up, so participation’s up. We’re putting the (junior varsity team) back in this year, so that will help us long term.”

Adding training at the junior varsity level and depth overall will aid a varsity program that was riddled by injuries last year, contributing to its 1-9 finish.

“Certainly, the last two years, the last six games of the year we played just completely undermanned because of our depth,” Knapp said.

But the influx of players should break that trend, and it may also help Cumberland replace some talented players that have since graduated.

Knapp is pleased with how the 2017 Dukes look at the line of scrimmage.

“We’ve got a pretty good offensive line,” he said.

Sophomore Blake Barker will take over at center after having gained some experience last year when Sims was injured.

“Like Blake, a number of those guys have just kind of got thrown into the fire, and they’re all coming back,” Knapp said.

The Dukes will also feature junior Christian Jackson, the younger brother of T.J. Jackson, who is now a redshirt freshman tackle for the Virginia Tech Hokies.

“Jonathan Langhorne came back from being off last year,” Knapp said while also highlighting the return of another senior — Roger Garrison.

The coach praised junior Kaijhuan Trent as being a strong player.

“We’ve got some pretty capable backups, and Thomas Trowbridge is one of those kids, and they’re really working hard,” Knapp said.

As for the most important game on the schedule, the coach pointed to the opener against host Charles City County High School.

“It doesn’t matter who you’re playing,” he said. “It’s always the first one.”