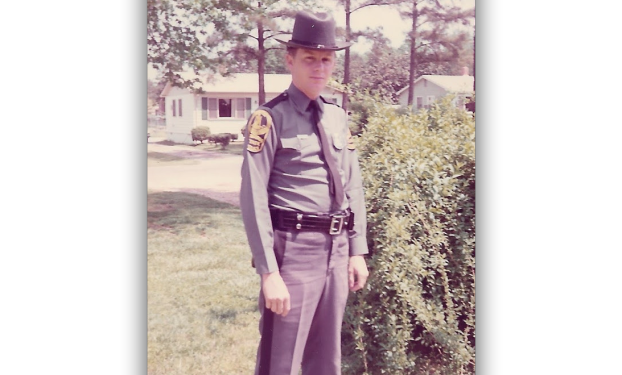 Henry A. “Andy” Blanton IV, of Cumberland County, is being remembered as a skilled, driven and compassionate public servant and leader.

Blanton was a 1965 graduate of Cumberland County High School and joined the Farmville Police Department as a dispatcher until joining the ranks of VSP, according to his obituary.

He became a trooper in 1968 and held a 31-year career serving as a road trooper, narcotics agent, investigator and safety inspector.

He was twice honored by the American Red Cross for serving above and beyond the call of duty.

According to his obituary, Blanton retired and went on to serve the Town of Farmville as properties inspector until 2005.

“Andy was a great man,” Hodges said. “He was someone that this community will mourn for quite a while.”

He noted that Blanton would not hesitate to offer advice to younger officers and used his law enforcement experience and training to serve the communities in which he worked.

“He was in law enforcement for all of the right reasons,” Hodges said. “He was in it to help people and make a difference in his community, and he loved what he did.”

Blanton was a member of St. John’s Lutheran Church and served as president, elder, legal trustee and community liaison for the church. He was also a leader in the Boy Scouts of America Troop 6516 and received the Lamb Award, which recognizes Lutheran leadership in scouting and the mentoring of young men.

Farmville Town Manager Gerald Spates said in a statement that he has fond memories of Blanton’s work with the town.

“Andy Blanton was a good friend to me and a dedicated employee,” Spates said. “He was compassionate, caring and loyal. He never knew a stranger and often went out of his way to help those in need. Before retiring from the VSP, he was responsible for checking local inspection stations for vehicle decals. We gave him the nickname of ‘sticker licker,’ which he thought was funny. We had a lot of good laughs and a lot of good memories with Andy. He will be greatly missed by us all.”

Blanton’s pastor, Matt Sorenson, of St. John’s Lutheran Church in Farmville, said in a statement that Blanton’s giving nature made an impact in the church and community, even shortly before his death.

“He gave as a husband and father, a Virginia State Trooper, a Boy Scout leader and in various positions at our church, including serving as president of the congregation,” Sorenson said.

Edgar Jones — a State Farm agent in Farmville — said Blanton was his scoutmaster in Troop 6516, and he was inspired to excel from Blanton’s influence.

“Even as a 12-year-old boy, I knew he was a special person. Andy had those special leadership and character traits that made you want to do your best as a young Boy Scout,” Jones said. “My respect for the scouting experience was shaped by the way I observed Mr. Blanton lead Troop 6516. I am blessed to have been able to say Andy was my Scout Master and friend, and I know that I am a better man because of this.”

Q: I still see the “For Lease” sign on the property at the vacant Huddle House. Is it still going... read more