Claudine Ripley Harris, 99, of Buckingham, died August 24, 2017 in Farmville. She was born August 22, 1918 in Buckingham County, a daughter of the late Floyd Nicholas and Mamie Guill Ripley. She was the widow of Guy Watson Harris. 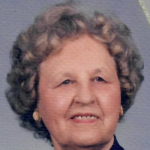 She was a storekeeper in the late 40s and 50s. She was a bookkeeper for her husband’s trucking business. She had an eye for antiques and incorporated them throughout her home.

In addition to her parents and husband, she was also preceded in death by sisters, Shirley R. Seay, Mary R. Chappell, Gladys R. Baker and brother, George N. Ripley.

Memorial contributions may be made to Trinity United Methodist Church, the Buckingham County Rescue Squad or the Toga Unit of the Buckingham Fire Department.

Ricky Wayne Ownby, 59, of Kenbridge, passed away on August 21, 2017. He was a self-employed plumber and electrician, and... read more