Brickhill: ‘The future is bright’

Half of America is a basket full of deplorables and the other half is the greatest group of “witch hunters” and “fake news experts” since Salem. 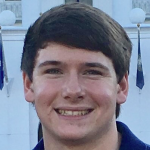 Republicans are going to let millions of people die by strangling away their health care, and Democrats plan on letting terrorists and drug lords overrun the country by refusing to place restrictions on immigration. Sound familiar?

Tune in to any news station, or show up to a party convention and you are is extremely likely to hear at least one of these positions being used as a platform. Politicians feed off the fear and anger generated by this rhetoric; just look at how effectively it was used during the last election cycle.

Unfortunately, for the rest of normal America, the by-product of this strategy outweighs the benefits presented to elected officials.

This nation’s leaders have effectively turned individuals with differing political views into political enemies. The stereotypes and stigmas that society has begun to associate with the “opposition” continue to contribute to an increasingly hostile political climate.

With this, it is no wonder that Democrats and Republicans appear to be incapable of working together. As the debt continues to mount, America’s enemies strengthen and her allies wane, it is very easy to be dismayed and pessimistic about this great land’s future.

There is a hope, but it does not lie with the current establishment of representatives, senators and executives. Although the current generation of leaders may be responsible for creating the overwhelmingly cynical sentiments that persist in this culture, the repercussions are only temporary. The future is bright, America.

The problems, issues and debates that are currently present will endure onto the shoulders of sequential generations, but the conventional and outdated approach to overcoming these challenges does not have to continue. There is a new group of young leaders that is preparing to rise and take the reins of this nation. It is going to take decades to reverse the trends that plague the U.S., which is exactly why the future and hope of America must lie with the younger generation.

Whether it be in Farmville or New York, it is time for the older generation to begin investing its time and resources into a younger and more malleable group of political leaders. Instead of wasting time infighting, support young leaders who stand for unity and help them learn from the mistakes of the last few decades. The failures of the past must serve as a referendum against divisive rhetoric.

Because of the hard work, dedication and vision of Jordan Whiley, along with businesses, volunteers, officials with High Bridge Trail... read more