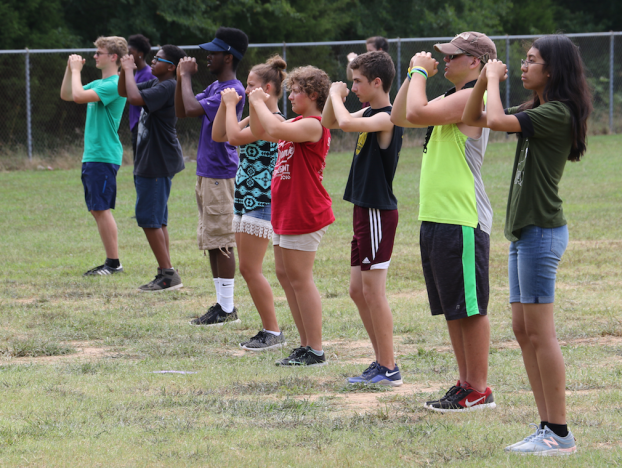 Banding together for superior success

“It’s been amazing,” said rising sophomore Jordan McDougald, who plays baritone. “For the first few days, we were working on fundamentals, and after that, we were going into drills, marching, after that, playing music. All in all, it’s just been really, really tiring, getting us really prepared for our marching season this year, which is awesome.”

The band is now under the direction of Tiarrah Crouch, who graduated from Longwood University in May. She said band camp was her first week on the job.

“It’s been really, really hot, but they’ve been really pushing through it,” she said of her band members. “I think the most challenging thing has been motivating them to keep going, but they do a lot of that themselves, so it’s been really fun.”

The camp ran Monday-Friday, with each day beginning at 8 a.m. and ending at 4 p.m.

At the midpoint of Friday’s session, Crouch confirmed the week had gone smoothly.

She has used band camp to help set the tone for the 55 students that are members this year.

Crouch noted that “the entire purpose of band camp is to establish that we don’t accept mediocrity and that we’re really striving for excellence. And that doesn’t start just when the school year starts. It starts prior to (that), and it’s a year-round thing and a constant thing that you have to keep pushing. And you have to keep working hard if you want to get those superior ratings or to achieve anything in life. So it’s really a time for them to analyze what they want and start the year off strong.”

The ratings she referred to are determined by the Virginia Band & Orchestra Directors Association, and expectations are high for what rating the PECHS marching band could earn this year.

“I am looking forward to actually being able to get a I this year, which is actually a superior rating for marching season,” McDougald said. “Last year we got a III,” which is a lower rating.

In his second year with the band, he said that to get the I rating, it will take dedication and hard work as well as an effort to make sure everyone is having fun and is not taking things way too seriously.

When it comes to naming his favorite thing about band camp, McDougald said, “I would say meeting all the new people who are joining band this year and pretty much becoming friends with them. And most of all, working with the drill for our first opener for ‘Go Down Moses’ — it’s been amazing.”

Roldan, also in her second year with the band, said her favorite thing about being one of the Marching Eagles is that “it’s really just a family, I think, of people that you can really relate to, and everybody’s really great, and I really enjoy being in it.”