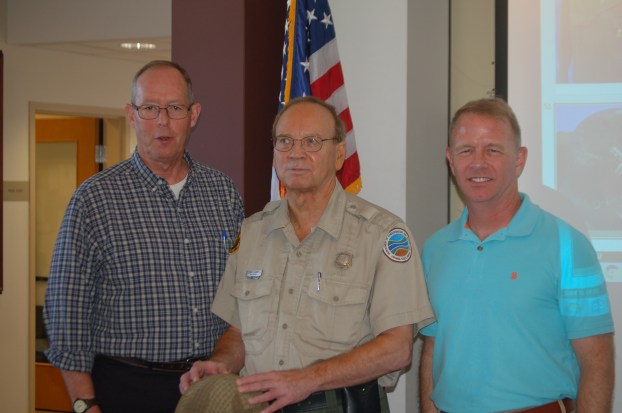 Authors of the book, “Let’s Go!: The History of the 29th Infantry Division 1917-2001,” offered the community a presentation at Sailor’s Creek Battlefield State Park on Sunday. Pictured are, from left, Alexander Barnes, Chris Calkins and Timothy Williams.

The park’s friends group, after the presentation, provided ice cream sundaes to those in attendance while reenactors portrayed infantrymen from the Civil War, World War I and World War II.

The book examines the division’s origins before World War I and its role in World War II and beyond.

The infantry was called the “Blue and Gray” during World War I, as the units came from Maryland, Virginia, North Carolina and West Virginia. The colors blue and gray were meant to symbolize the Union and Confederate states joining forces to protect the U.S. during World War I.

The presentation, in particular, focused on a Farmville native who served in the 29th Division during World War II.

Calkins said during the presentation that Ulric Otto Rothgeb, also known as “Rock,” was born in Prince Edward County and grew up in Tuggle near Prospect.

Rothgeb was enlisted into the Company G of the 116th Infantry, 29th Division, which was a National Guard Unit.

Rothgeb received basic training in Maryland before heading to England for assault training. Rothgeb, along with the other members of the company — many of whom were from Farmville — landed on Omaha Beach along the French coast. Rothgeb was in charge of armored car driving.

Calkins said Rothgeb received a Bronze Star for saving equipment threatened by an enemy mortar and artillery barrage falling in the area and knocking down heavy tree branches.

After finishing his service in the war, Rothgeb returned to Farmville, married and lived near Prospect. He worked for the Virginia Power Company until his retirement and started a stand selling fruits and vegetables in Appomattox.

He moved to a farm in Buckingham later in life, where he died at age 87.

Calkins said he found some items belonging to Rothgeb at a gun show, while many of Rothgeb’s collections and stories came from his son, who Calkins visited while writing the book.

Calkins said this and similar events help bring people with an interest or prior interest in the armed forces together.

“This is a series of similar programs at Sailor’s Creek which has taken place for many years, and teaches various subjects,” Calkins said.

Barnes said he, Calkins and Williams sought to describe the infantry division’s activities that go beyond their most famous station in Normandy during World War II.

Williams noted during presentations at different events people have given the three collections and uniforms belonging to the 29th Division.

Ed Dunn, a Farmville resident and a member of American Legion Post 32, said he enjoyed learning about Rothgeb.

“I thought it was great,” Dunn said of the presentation.

The fabric of our community

On Aug. 13, my heart was filled with hope after taking in the horror and death of the riots in... read more