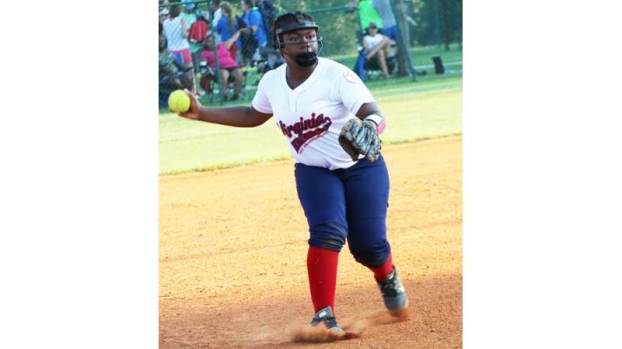 Virginia built a 4-1 lead after three innings Monday, but Alabama came back to win 10-7.

“We made it competitive, but we came up a little short,” Virginia Manager Larry Conwell said. “We just gave up nine runs in two innings. We just had a few errors, but they had a lot of base hits, just in the holes.”

Though he was naturally hoping his team would continue its win streak, Conwell was happy with what it achieved in four World Series games.

“To finish 2-2, I was very proud,” he said. “We just had, I think, three bad innings all weekend. And all four games we were competitive.”

On Monday against Alabama, Virginia’s Brooke Conwell gave her team a 2-1 lead in the second inning when she hit a solo inside-the-park home run. Brianna Overton went 2-for-2 at the plate.

Leading up to Monday’s game, the PEFYA Ponytails rebounded from a Saturday loss — their first loss of the summer — to go 2-0 on Sunday.

Virginia started Sunday with a 15-0 rout of Texas in four innings.

“Yesterday, I don’t know who they were,” Conwell said of his PEFYA Ponytails All-Stars on Sunday. “Today, this was the team that we’ve been coaching and (that they’ve been) playing as.”

On offense, Da’Nasia Dupuy and Alani Walton each went 3-for-3.

“We all hit the ball,” Conwell said. “We just all made good defensive plays. It was a great team effort.”

Virginia scored eight of its 15 runs in the fourth inning.

Sunday evening, the PEFYA Ponytails defeated Tennessee 9-7 to advance to the final six at the World Series.

“We hit good again,” Conwell said. “We had a few errors in the fourth inning that kind of gave them some runs, but we played good. We hit good, good defense — we had a real good all-around game, and I think Tennessee is probably one of the better teams we’ve played so far.”

The game was tied 1-1 after the first inning, but then Virginia went up 3-1 in the second and 6-1 in the third. Tennessee outscored Virginia 4-1 in the fourth to make the score 7-5, and each team scored two runs in the sixth to make it 9-7.

Virginia was in position multiple times to pile up even more runs.

Conwell said that on offense, Virginia was successfully stringing together hits, and it benefited from many walks as well.

At the end of his team’s 2-0 day, Conwell said, “That was the goal was to get some wins, and I was proud, and I think we’re playing good now.”

In the loss to South Carolina on Saturday, “we just had probably about eight or nine errors in the first two innings, and it was just very uncharacteristic of this team,” Conwell said. “We probably didn’t have eight errors in the district and state tournaments combined.”

He said he did not know if nerves were the issue, but he gave credit to South Carolina for being a good team, though he felt like his squad was capable of beating it.

After the initial struggles, “we played solid defense the rest of the game,” Conwell said, but he estimated that nine or 10 of South Carolina’s runs had come off of Virginia errors.

Lucas provided one of the few highlights in the game for Virginia, hitting a triple.

The game was originally scheduled for 2 p.m., but due to rain delays, it became an evening contest, starting around 6:30 p.m.

The PEFYA Ponytails All-Star team finished with a record of 10-2 this summer after going undefeated in the state and district tournaments.