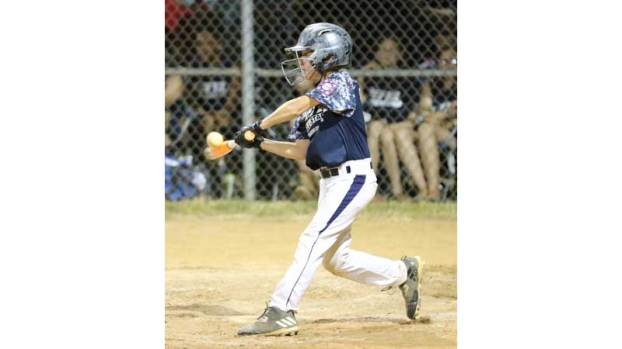 Sawyer Furlong and the PEFYA Minors All-Stars team are headed to the 2017 Dixie Youth Baseball AAA Minor League World Series in Alabama after winning the Virginia state championship Wednesday night. Furlong was the top batter in the state tournament. (Photo by Titus Mohler)

To clinch the state title, the PEFYA Minors defeated the Appomattox All-Star team 11-10.

It was the second half of a doubleheader, the first half of which put Prince Edward-Farmville in a rematch with the only team that has defeated it this summer — the Montgomery All-Star squad. Making their 12-11 Monday loss a distant memory, the PEFYA Minors eliminated Montgomery with a decisive 13-6 victory early Wednesday evening.

Representing Virginia at the World Series, PEFYA is slated to play Arkansas on Saturday, Aug. 5 at 5:45 p.m. Win or lose, Prince Edward-Farmville will play again the next day at a time to be determined.

Key contributors to the state title game win over Appomattox included Harold Landis, who hit a two-run home run, and Clevante Watkins, who went 3-for-3.

PEFYA’s Sawyer Furlong was the top batter of the tournament, producing a batting average of .588.

The Prince Edward-Farmville Minors squad is now the fourth Dixie youth team from the Heart of Virginia this summer to win its state championship and advance to the World Series in its respective division.

The Buckingham County Youth League Majors All-Star team will be going to Oxford, Alabama as well, for the Major League World Series, while the PEFYA Debs and Ponytails All-Star softball squads will be headed to Alexandria, Louisiana and Sumter, South Carolina, respectively.

Preparing for the World Series

Both the Ponytails and Debs All-Star teams from the Prince Edward-Farmville Youth Association (PEFYA) have been raising funds and resting... read more